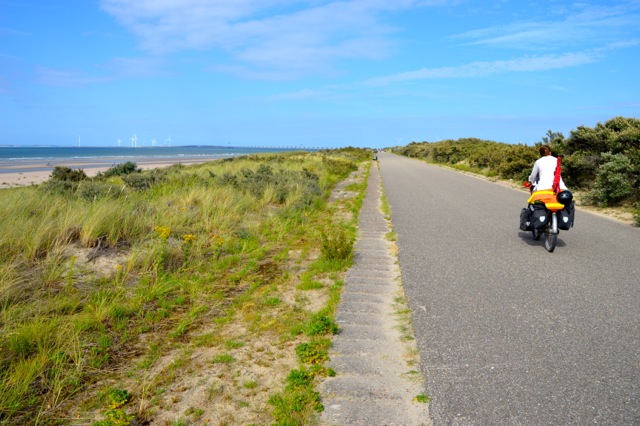 When most people think of the Netherlands, visions of tulips, wooden clogs and windmills spring to mind.  For me, first and foremost it’s bicycles.  After decades of cycle friendly laws and infrastructure spending, Holland can claim its well earned title as the cycling capital of the world.  There are more bikes per capita than cars, more people cycle than drive and the easily navigable maze of bike paths that criss cross the country make this cycling paradise.

Cycling towards the Belgium/Holland border

Welcome to the cycling capital of the world – The Netherlands.

Crossing early in the morning from Belgium into Holland, we were excited about hitting the cycle routes, reaching the coast and going for a swim in the North Sea.  Our friends in Belgium had suggested the best and most scenic route to Den Haag would be along the North Sea cycle route – the LF1.  This route would also take us passed Hoek van Holland,the port where we will be catching the ferry to England from, after spending a couple of weeks exploring the Netherlands and visiting friends.

Cool art on a disused lighthouse, due to engineering the sea is now miles away. 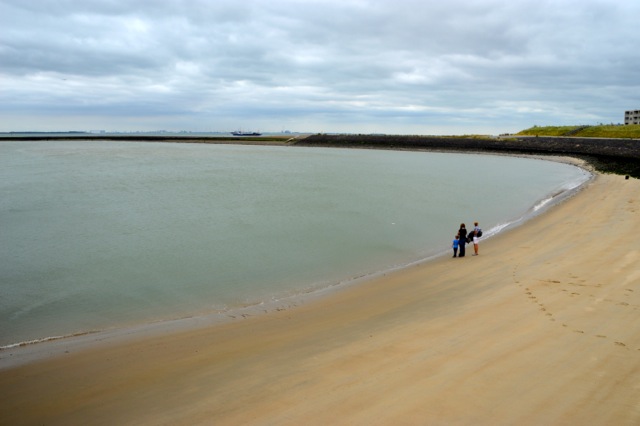 Our first view of the sea for many months. 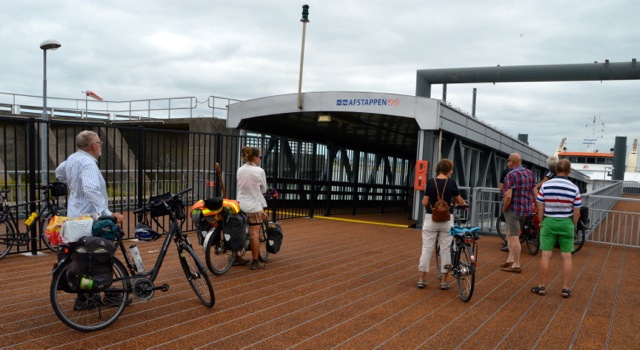 Waiting for the ferry in Breskens.

There is ample bicycle parking on all ferries in the Netherlands.

We followed clearly marked signs and cycle paths through small villages until we reached the coast and our first ferry crossing from Breskens to Vlissingen.  After being land locked for so long we relished the sensations of the salty air filling our nostrils and the blue of the water enticing our vision.  Most of Holland is below sea level and the Dutch have built hundreds of sea walls and constructed dozens of sea dams to steal land that the sea had once claimed as her own.  Kilometre long bridges and tunnels join the many land legs that jut out into the water, saving kilometres of backtracking to reach the same destination.

Cycling the North Sea coast route, wind at our backs.

Taking a little water break and admiring the view.

Windmills and wind go hand in hand, and the Netherlands has more than its fair share of both.  Luckily for us it was blowing from the south west, the perfect direction for a tail wind.  All we had to do was sit back, let the wind do its job, enjoy the sunshine and the wonderful scenery that the North Sea route provided.  Oh yeah and go for that swim…

The North Sea cycle route took us through sand dunes… 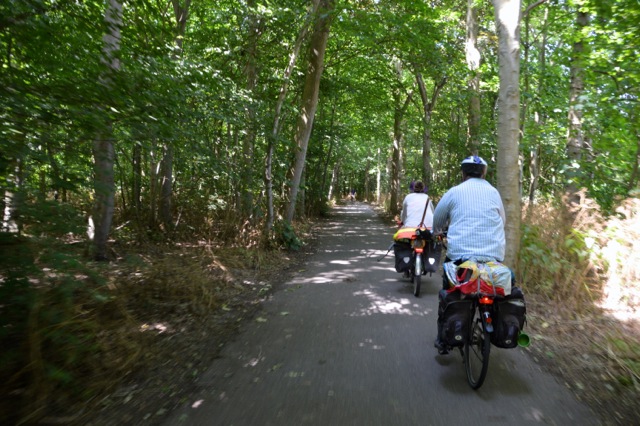 Along man made sea walls… 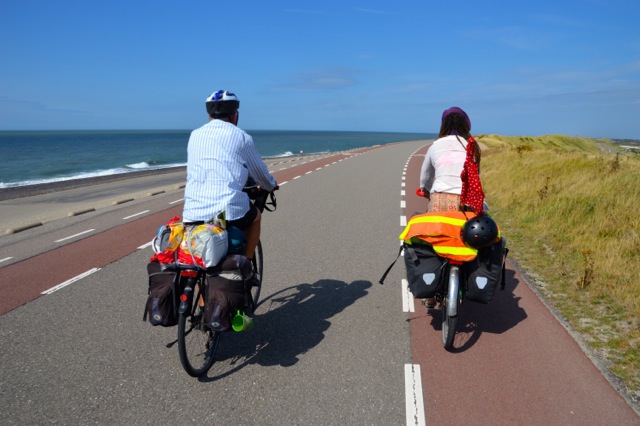 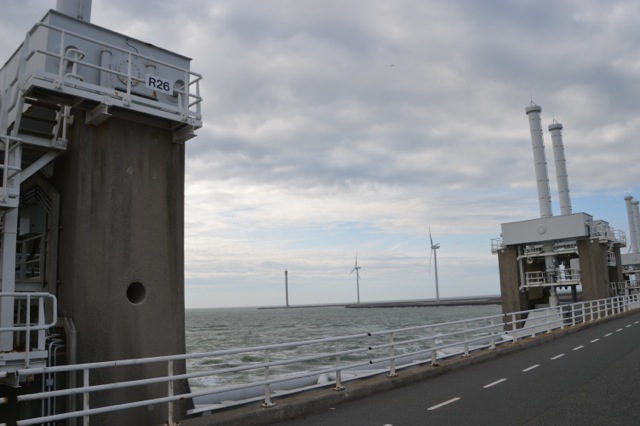 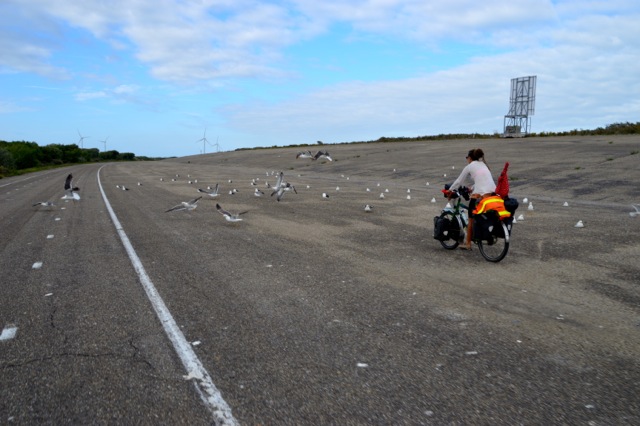 We had flown that day and as the sun began to lower herself towards the horizon and rain clouds gathered in the sky, it was time to find shelter for the night.  We had passed many signs for micro campgrounds, so we pulled into one and found the owner who showed us to a lovely patch of grass (and a warm shower) that we could call home for the night. 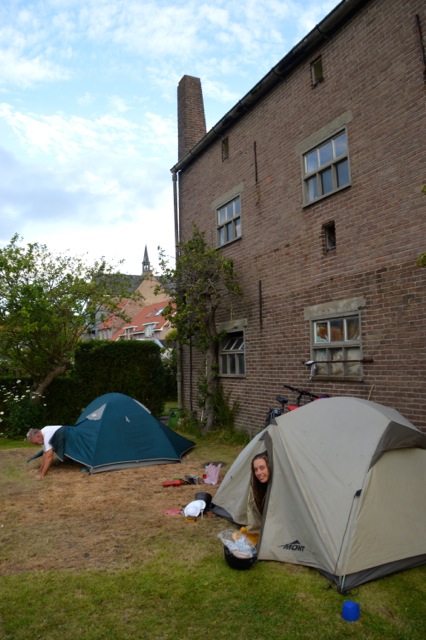 Setting up our home at a micro-campground.

Jude thought it was time for a sign on her bike.

We woke early the next morning to find the wind still in our favour.  After a quick cuppa and a bite to eat we hit up the local church fair where we stocked up on home made jam and cakes.  Hoping to make it to Den Haag that afternoon we needed all the fuel we could get.  The riding continued to be stunning, the villages inviting and the kilometres fast.

Through fields of wildflowers. 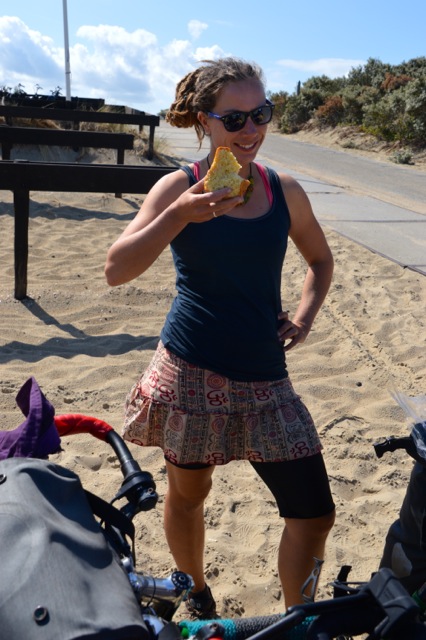 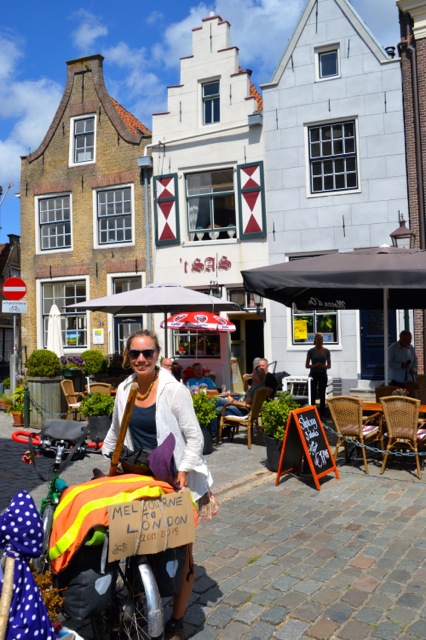 And then stopping for a coffee.

In this cute village.

Jude’s sign turned out to be a hit with everyone.  It was an ice breaker that started conversation and we spent our time cycling with groups of other cycle tourists sharing stories from the road.  This was also helpful as when we turned west along the south bank of the Hoek van Holland Port, the wind ended up in our faces and the lovely people on electric bikes provided the perfect windbreak.

The route then hit the industrial shipping area. 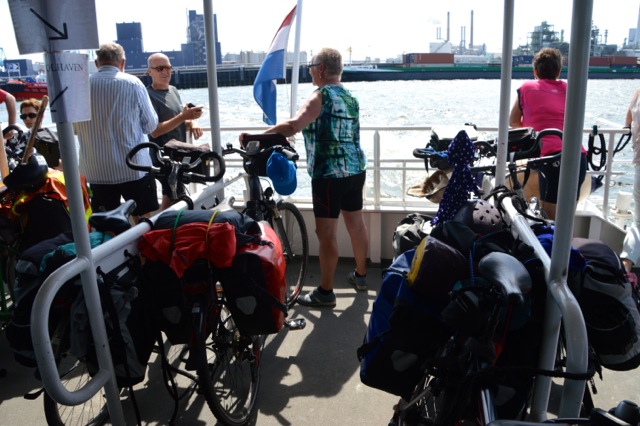 Where we caught another ferry with bicycle parking.

The cycling day was slowly drawing to an end.  A quick ice-cream stop perked up the energy levels enough to see us pedalling along a path through some sand dunes which popped us out into Den Haag.  It was here that we would again meet some cycle touring friends from the road – Pimm and ChuHui – whom we had met in the Cameron Highlands and again in Penang back in Malaysia.

We then cycled our way through Den Haag.

To visit with the wonderful Pimm and ChuHui

Three wonderful days were spent sharing stories and food, wandering the streets, admiring the works of the Dutch masters at Mauritshuis, eating the best ice-cream in the world and sailing on one of the many lakes nearby.  It was here that I had my first lesson in sailing.  Being a very windy day it was proving to be a struggle, my knuckles were white from nervousness but I was holding it together until our last tack where I managed to almost capsize us.  As water entered the yacht my heart sank as I acknowledged that both cameras were now submerged, never to be used again.  The engine then failed during our return to the dock and as we struggled to get the yacht in (with a mixture of ropes and pulling and pushing), other sailors sat back and watched the spectacle, glass of wine in their hands, not one offering to help.  Back at home in dry clothes with a cuppa in hand, we had a good laugh and agreed that next time things would be better.

They took us sailing. 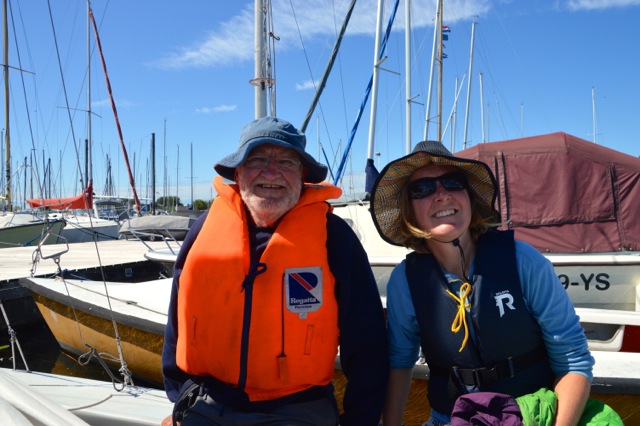 The last photo on our SLR before it went swimming never to be used again.

From here we split paths for a few days, dad went to visit an old friend and we cycled on to Breda to meet Franz and Eveline, other cycle touring friends who we first met when we hosted them in Melbourne.  It was a full days ride from Den Haag to Breda, following a myriad of cycle paths.  Somehow this time the cycle route number system left us in a pickle, so good old maps.me was consulted and we continued on our merry way.  This was our last day of long distance cycling in Holland and we relished in the joy of our movement and the freedom cycle touring instills in your heart.

Franz and Eveline had just returned from a cycle tour of their own, starting at the place in Greece where Eveline had been struck by a car a few years ago (an accident that turned into a life saving coincidence), continuing on to Turkey and beyond.  Indefatigable as they are they welcomed us with open arms and open cellar – Franz has been tempting us to their beautiful home with promises of great beer.  Evenings were spent sipping many of Franz’s favourite beers, outdoors overlooking the garden, sharing lively conversation about touring and the state of the world. Days were a relaxing mix of perusing one of the many books in their library (mandatory cuppa in hand) and wandering around the lovely town of Breda soaking up the Dutch architecture and culture.  And a few more beers.  We celebrated Eveline’s birthday with her, an occasion that filled me with hope, happiness and inspiration that I will continue to cycle tour and live an adventurous life like she does. 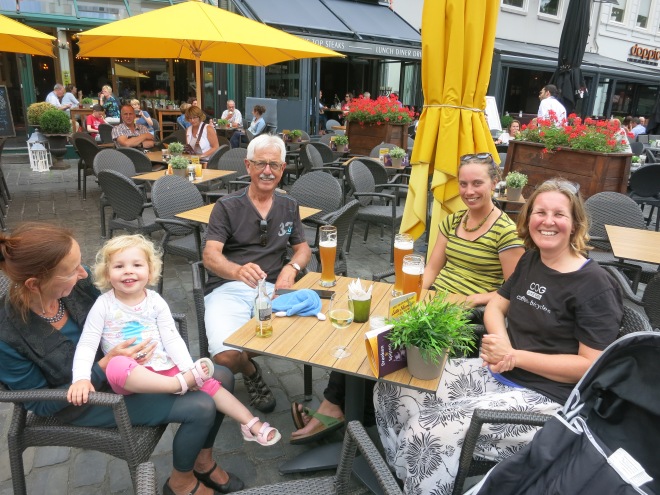 Back at it – relaxing at one of the many outdoor bars in Breda.

Maybe a few too many brews? – teaching Gieske how to do a bum dance in the street. 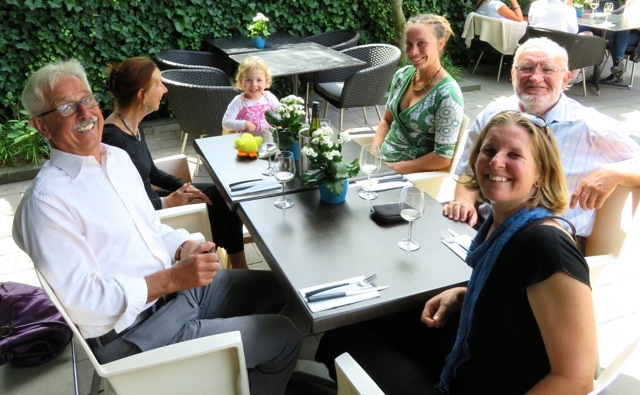 All too quickly it was time for us to head on to Amsterdam to meet other friends.  Bill had flow over from Australia to spend some days exploring the delights of the capital with us, and a Dushanbe reunion was brewing for the last day.  Arriving at Amsterdam Centraal we followed the bike lanes east to the campground we had booked for the week to come.  Seems like we weren’t the only ones in town on a budget, the place was pumping.

Saving time and catching the train to Amsterdam. 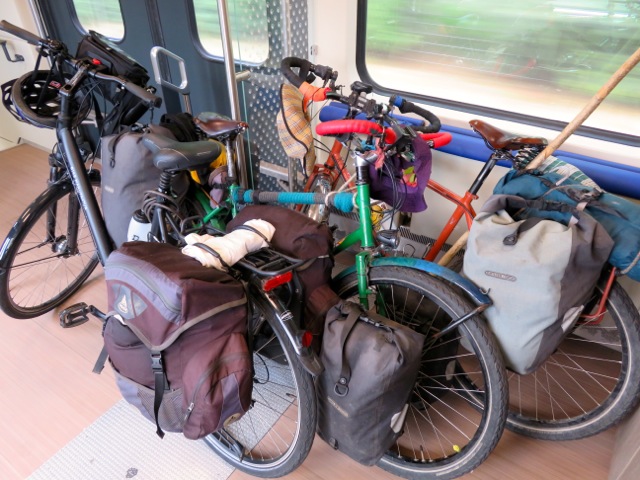 It still amazes me how easily you can take bikes on public transport here.

I love the dedicated bike lanes – heading east from the main train station.

Camping with a view.

Not the only ones on a budget…

Our days were spent exploring Amsterdam by bike, boat and foot. 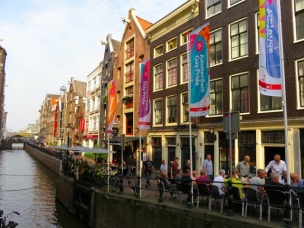 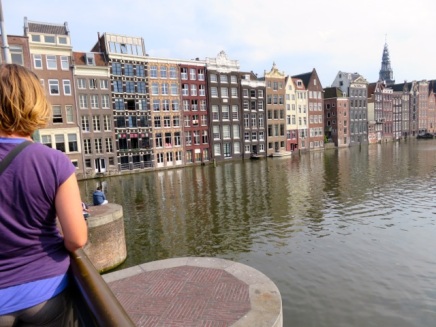 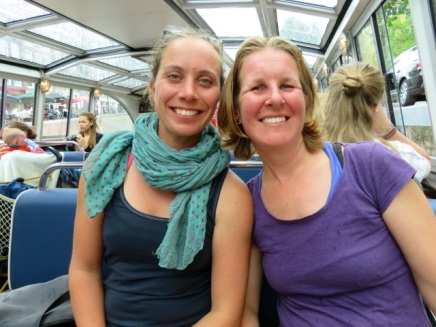 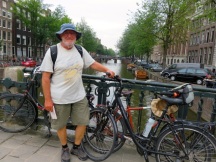 We sampled most of the local specialities… and partook in some cultural activities… missing the one in a thousand year storm that hit Amsterdam (uprooting trees and decimating the campground) while we looked at the Dutch Masters in the Rijksmuseum. 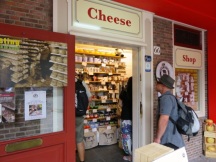 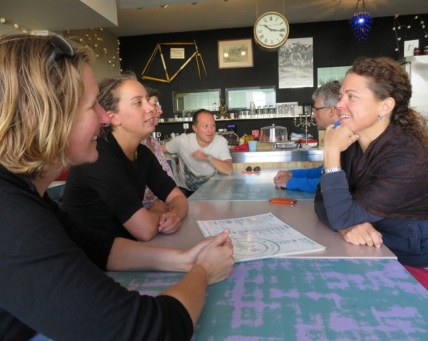 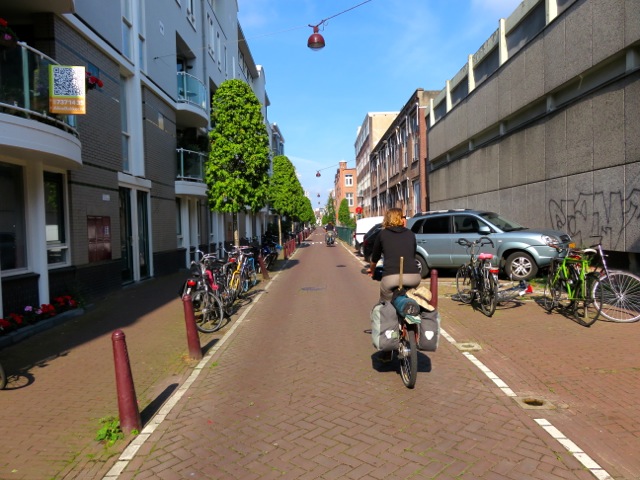 Leaving Amsterdam on the train back to Breda, the glow that comes from spending time with friends and loved ones still enveloped me.  Life on the road does distance you from your community back home, as well as providing you with a new group of like minded friends.  Connecting physically with both here in Holland showed me that I am perhaps ready to settle for a while, create a home and open my doors to all those that I love and those I have not yet met.

Hot drink break on our walk through the forest.

Jude as a frog…

After a day of packing, walking and sharing more time (and beer) with Franz and Eveline, it was time to say goodbye to them and the Netherlands.  Ready for the next leg, it was lovely to cycle the streets of Breda together, a farewell escort to the train that would take us to Hoek van Holland and our ferry to England.  Gale force winds hit us as we stepped off the train and continued to bombard us as we waited in line to board the ferry.  Weather matching emotions is common on the road and the gusty, forceful wind was fitting.  It was time to leave the continent, to head to our last country on this journey, the place we would call home for the next few years.  Memories of the past mixed with hopes for the future.  Ready to take that step we watched as the land disappeared into the horizon.  And then we befriended the other cycle tourists on board, shared duty free beers and kept on living the life we know and love.

Our farewell escort to the station.

Through the streets of Breda. 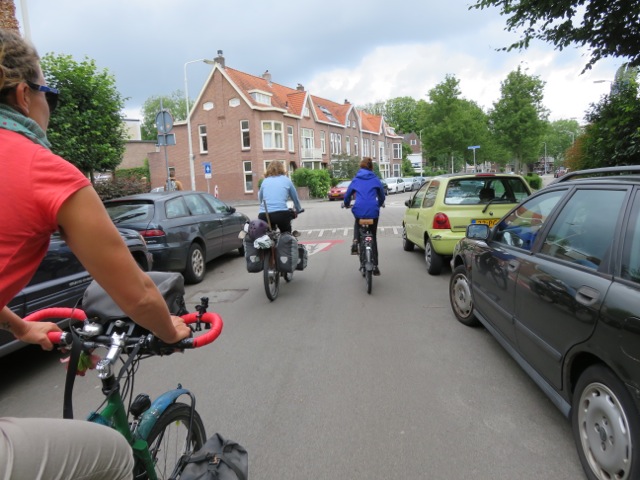 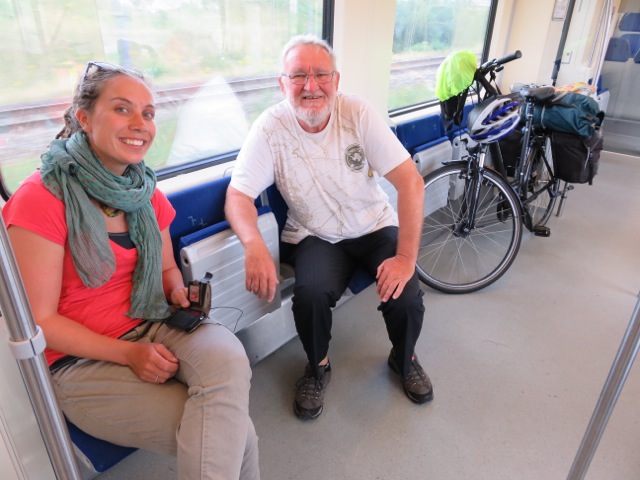 On the train from Breda to the ferry port. 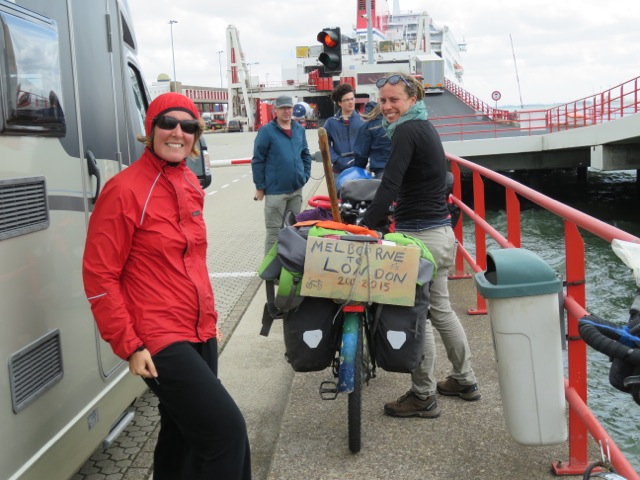 Waiting in the wind to board at the Hoek of Holland. 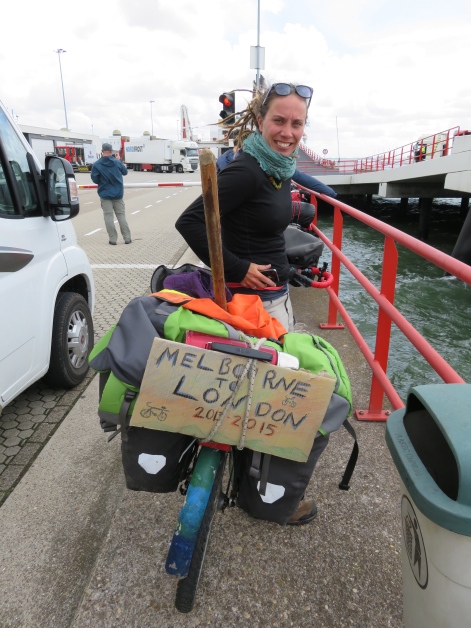 One thought on “Cycling Paradise – Welcome to The Netherlands.”