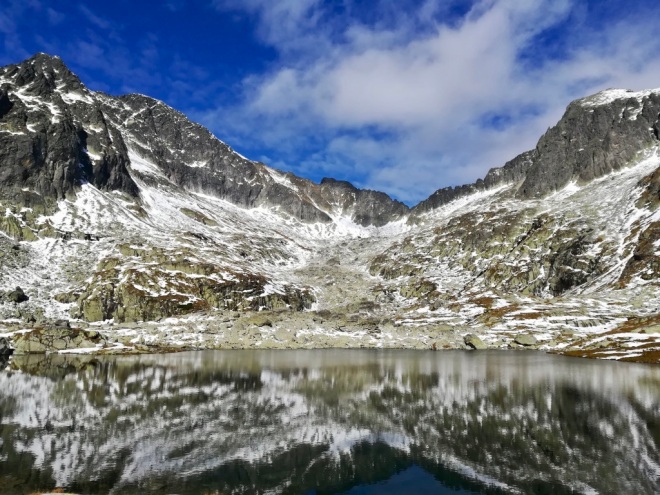 I just saw a selfie of our cycle touring friends Pedals & Paws from the Slovakian border.  They are in full winter gear, including ski masks, and it looks freezing.  It reminded me a bit of the day that we chose to leave Poland prematurely and cross into Slovakia early.  Watching the rain fall at the old border station of Lysa Polana, chewing on another jam roll, stamping our feet to keep them warm, we deliberated between hiking the Polish five lakes trail in the cloud and drizzle, or to turn left and cycle the 10 metres to cross into Slovakia and start our cycle south. No brainer, right?  Decision made, we took the obligatory border photos and within minutes the drizzle ceased and we were getting hot from the first of many climbs in this mountainous country.

Munching on a jam roll at the old border post. 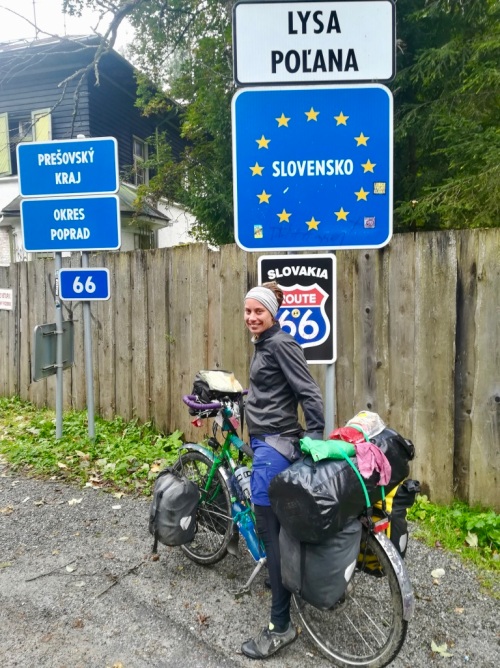 Glimpses of the Tatras returned through the clouds as we wound our way up and over to the southern side of the range.  Sleepy towns greeted us as we cycled through, while disused chairlifts and pommas hung limp in the autumn air.  Only the noise of cars and chainsaws broke the silence.  I came to realise yet again that in many countries the title of National Park offers no protection to trees from logging, as large swathes of forest were decimated.  I wondered, had Slovakia declared a war on nature without informing anyone?

The High Tatras hidden by the clouds 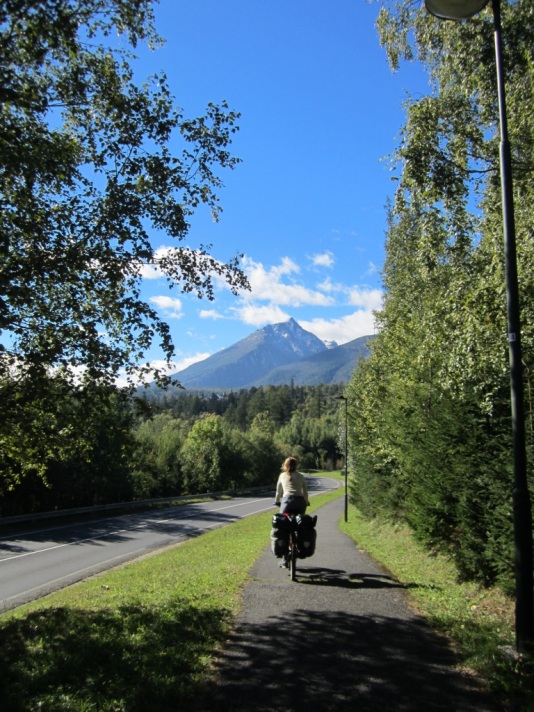 The southern side of the range became clear in the afternoon.

To clear the nature loving blues we decided that a walk in the mountains would lift our souls.  Backpacks that we had been lugging around for the last few months were finally pulled out and packed with enough gear for an overnight hike.  Our bikes and remaining bags were hidden in the forest and we started climbing alongside a gushing river towards the pointed peaks above.  Autumnal colours shone in the golden afternoon sunlight and all was well with the world again.  Reaching a height of 1,300m as night fell we camped next to the river, purposefully ignoring the no camping signs we had seen earlier.  I reasoned that as logging, dogs and human excrement were a constant in the National Park, this rule could (and should) be broken. 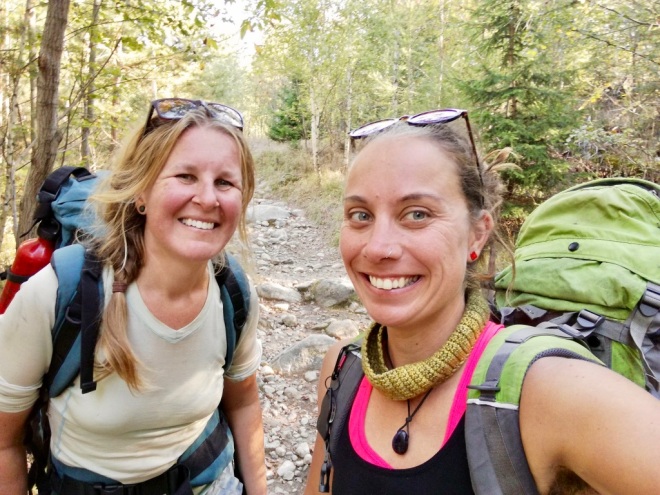 Heading towards the peaks.

On the trail, loving the colours. 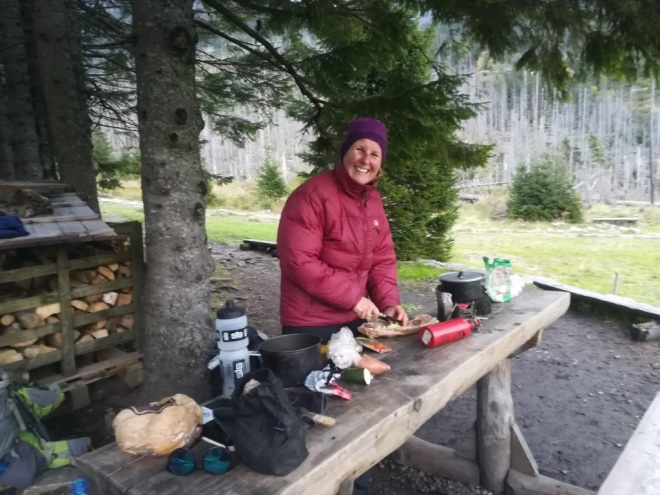 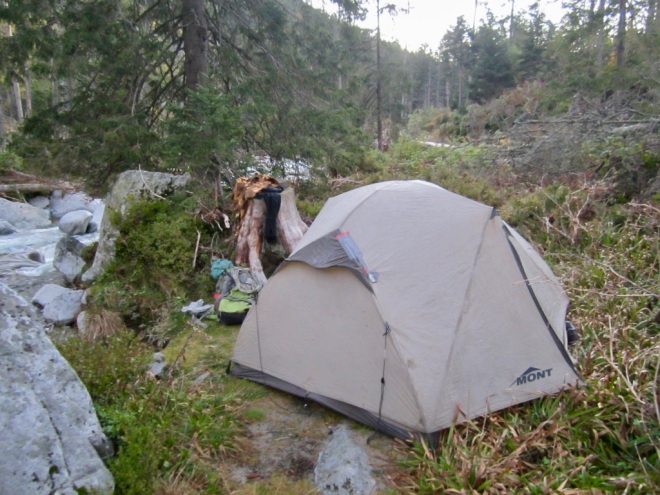 Our campsite next to the river.

Glowing red peaks were the backdrop for our morning dip, followed by a warming meditation in the sun, and a hot breakfast and cuppa to finish our daily ritual.  A growing trickle of walkers that had driven to the carpark nearby were trudging up the well worn path already, so we followed a solitary hiker as he diverted from the path behind a crag.  Luckily we didn’t bust him taking a wee, but found an old path that climbed through a beautiful pine forest rejoining the track after a few kilometres.  Back with the crowds I had to stop often to let others pass, as I dislike the sound of walking poles clacking and humans panting behind me. 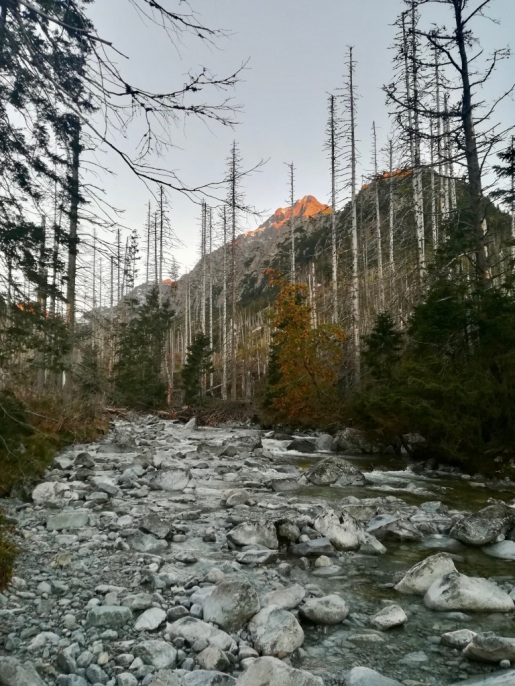 Heading to Rainer’s Hut to meditate and eat breakfast.

Words cannot do justice to the scenery that opened before us above the tree line.  Snow dappled giants of grey stone towered above us and that feeling of awe that nature induces filled my being.  It was soon pouring out of my sweat glands as we climbed the rock wall in front of us to reach the lakes and mountain hut we had been aiming for.  Refreshed with a big bowl of lentil soup we continued along the circular path I had eyed out on the map.  After another half hour of climbing and scrambling over rock and snow we rounded a corner to another snow covered grey giant and my heart fell.  A group of people were gathered half way up the face, a wall of snow and ice above covering the path that is usually there.  A brave few were attempting to rock climb the crag to the side, while others were turning back.  We sat for a good half hour deliberating our next move.  Was today the day that we should attempt the toughest mountaineering of our lives or the day that we were thankful for the climb we had done so far and be satisfied with what we had?  We chose to be satisfied and turned back as hordes of other hikers rounded the same corner to deliberate the same question.  Returning via the same path the slow trickle from this morning had tuned into a torrent of hikers – the Slovaks truly are hardy mountain people.

My queen of the mountain 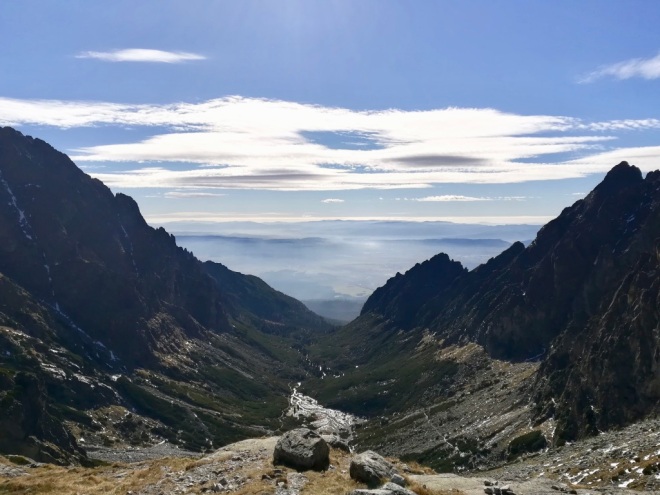 Looking back on where we had hiked from.

Scrambling up the rocks.

It was near sunset when we returned to our bikes and bags.  After slipping a few times on the snow and rocks during the descent, I was quite battered and my feet were metaphorically broken.  Food and a forest camp were balm to the body, and just for pleasure we forwent our alarm and had a luxurious sleep in.  Over a couscous breakfast, we planned our route through Slovakia.  Time’s fingers were starting to flick our rear mud guards and as such our cycling in Slovakia would be brief.  The straightest line from north to south along minor roads was plotted and we head off that morning invigorated to be moving fast again. 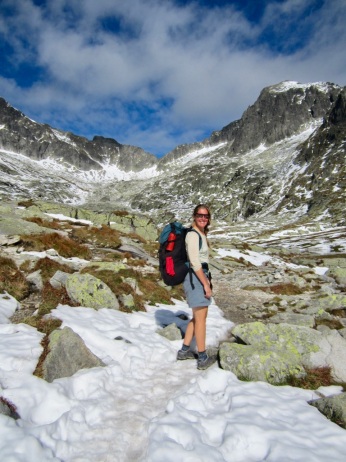 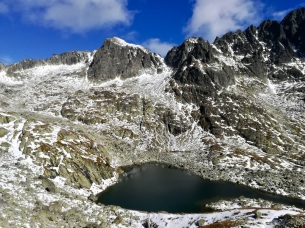 Our bags were still there when we returned 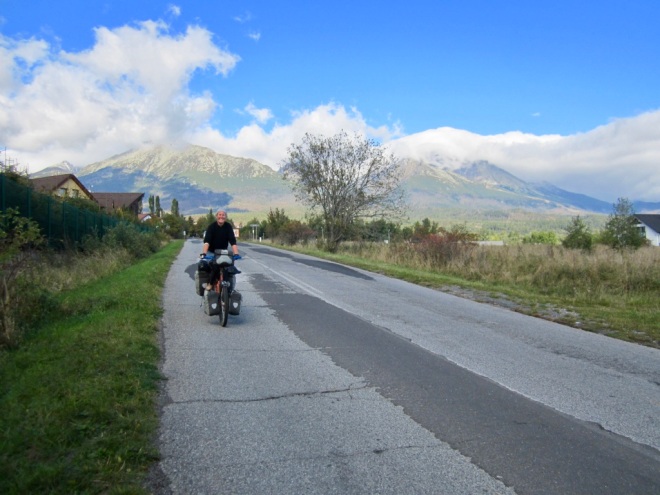 Cycling away from the High Tatras, heading south.

Fast is a subjective term, especially in such a mountainous country.  There were many ranges and valleys between us and the Hungarian border.  Gradients were usually 12%, and despite my initial trepidation at the beginning of every ascent, each down stroke reminded me that I really do love to climb and I’m surprisingly good at it.  I was picked on as a teenager for having thighs like tree trunks and I used to hide them in shame.  I now look at these same legs and am eternally grateful for their size, strength and power.  And as my tan line can attest – I have no shame of showing them off 🙂 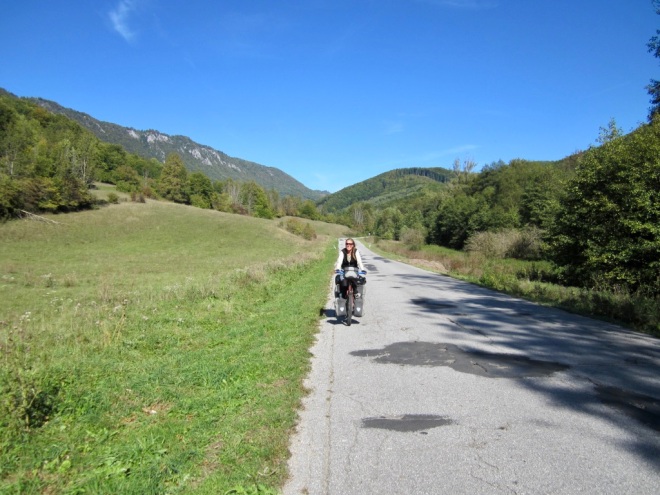 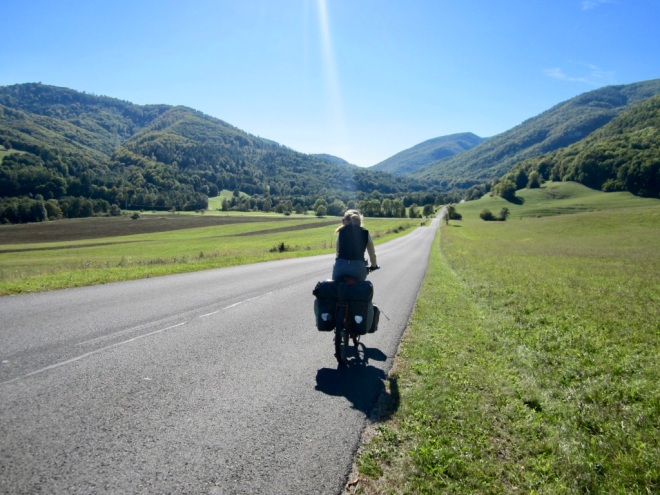 Historical sites, natural phenomena, feats of human architecture and enchanting villages were welcome additions to our ride.  Information plaques constantly reminded us of the pervasiveness of the wars, the history of human struggle, and the resilience of the human spirit throughout Europe.  Our interactions with locals were fleeting and my connection with the country was mostly through its natural beauty rather than its people and current culture.  This I am sorry for, as connection with people and place is what I now seek in our travels.  Hopefully next time…

Our route is a collage of memories and associations.  Leaving the High Tatras we picked and ate the best apples of my life; in Poprad we rediscovered the joy of olive bread and I read the funniest book ever (All my friends are still dead); we munched on rolls beside Stary Kamenolom, cringing at the signs showing how they plan to develop this lake into an Ikea style “nature area”; we imagined what it was like to be a guard at Tisana – a natural rock barrier that was used as protection against the Nazi’s and to guard the town of Vernar (reported as the site of the Slovak uprising); we admired the autumnal colours that were in their full glory in all the forests we passed through; we brain stormed how to bush mechanic our broken tent pole as dusk set in on a disused back road in the Paradise National Park; I lay petrified in the tent thinking there was a bear or stag outside our tent – when in fact it was Jude snoring next to me;  we watched a shepherd sleeping as his cows wandered under a viaduct near Telgart; we missed our last opportunity to buy food on a Sunday so had to make do with whatever was left in our panniers; we lay in the warm afternoon sun and cooked up a feast next to the waterfall outside the charming village of Muranska Huta; I enjoyed my first sighting of old trees in Slovakia in the Narodny Park Muranska Planina; we enjoyed the glorious downhill into Muran – a ride I will rememver forever; I admired the colourful iconography on the giant cross that overlooks Muran on the other side; we did wheelies in the square outside the old church in Tisovec; a squirrel was the talisman I needed to choose the magical campsite we had one night in yet another stunning forest; we cooked breakfast under the trees in the centre square of Hnusta as a gentle rain fell; our longest conversation was had with a local via broken English and mime under the castle in Halic; I was almost killed by a truck on route 75 climbing the hill near Lake Luborec; Jude built us a fire on our last night camping just outside Male Straciny – but I was too sick with a fever and nausea to enjoy it; and passing a cute little restaurant in Zahorce and being happy that despite the rumours of great beer in this country we have spent our whole time here alcohol free. 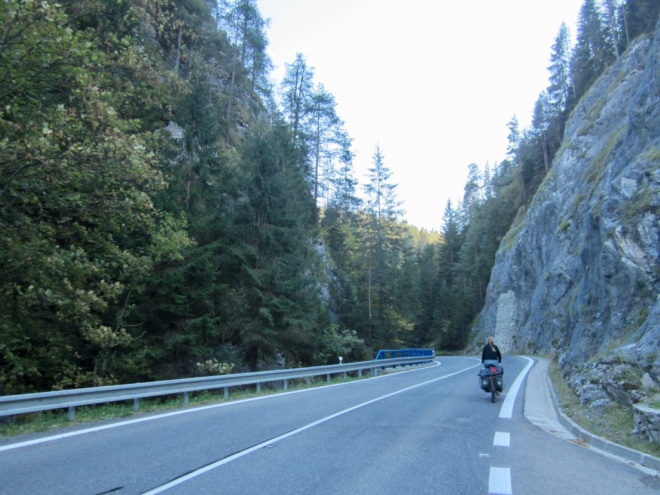 Cycling through the natural rock barrier of Tisana. 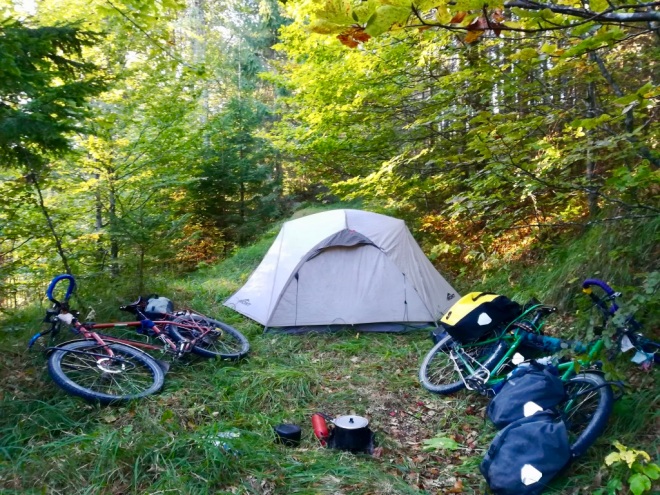 Camping on a disused mountain track. 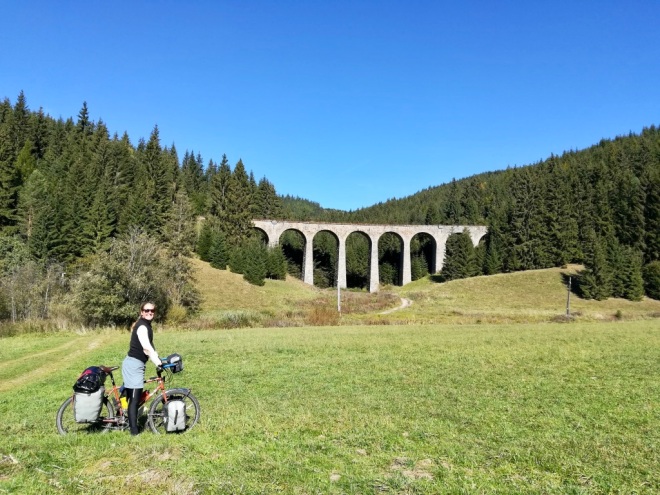 Breakfast in the centre of town Hnusta.

As in life there are many more that I failed to either recall or mention, but I’m sure you get the drift of our journey there now.  Yet, my final memory is of promising myself at the border in Slovenske Darmoty, to come back and visit Slovakia again when I have more time.  Despite loving most of what I have seen and experienced, I have not given Slovakia the time she deserves and I hope to one day rectify this.  So to finish I want to thank you Slovakia for having us, however briefly.

2 thoughts on “Our mountainous road south through Slovakia.”