Ready for our ‘big’ bike tour of Scotland…

A year on and it is time to finish what we had started. On a sunny spring day last year we had cycled into Glasgow, from Lands End, and promised ourselves that we would come back and give Scotland the time it deserved.  We also had promised ourselves at some point, that we would cycle the Hebridean Way (a tour of the islands of the Outer Hebrides).  With a month and a half left in the land we have called home for the last two and half years, it was time to honour these promises.  It was with great excitement that we pulled out all of our touring gear and packed for our “practice run” for our upcoming journey home.  Gear wise, Scotland in spring would be a worthy comparison for Iceland in summer.  The tent and and our waterproofs were reproofed, the holes in the panniers and clothing patched, our gear sorted and the bikes self-serviced at our fave bike place – the London Bike Kitchen.

A cycle touring bomb exploded in our room

Ready to set off from Charlton

Fully decked out, we cycled from Brenda’s place in South London to Euston Station to catch the train to Glasgow.  In true Virgin Train’s style we were given only minutes notice of our departure platform and had to scurry to get the bikes and our gear on in time.  In true Network Rail style the train was continuously delayed by signalling failures and half way through the journey the train behind us had caught up with us so we were made to get off our train and get on it.  We arrived in Glasgow late and due to this our whole fare was refunded – who doesn’t love a free trip to Scotland? 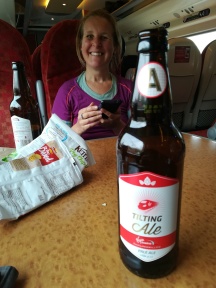 We had loved Glasgow so much last time, that we chose to explore it for a couple of days before hitting the road.  We wandered around the Cathedral precinct, admired the pomp of the graves in the Necropolis, gazed at the architectural designs of Mackintosh, counted the heads and appreciated the art at Kelvingrove, indulged our love of all things transport at the Riverside museum, ate delicious asian street food at one of the many vegan restaurants/pubs that make Glasgow the vegan capital of the UK, sampled many of the the local microbrewery beers and our highlight, watching the amazing kinemats of Eduard Bersudsky at Sharmanka Kinetic Theatre.  A very big thank you to our wonderful WarmShowers hosts Adrian and Laura, whose company was fabulous at the end of each day. 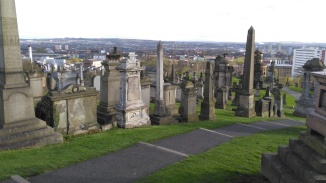 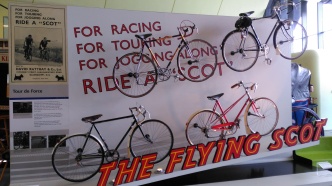 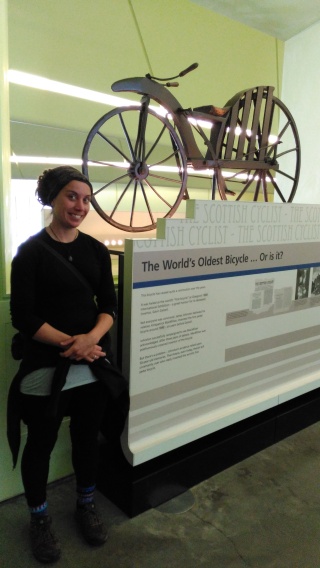 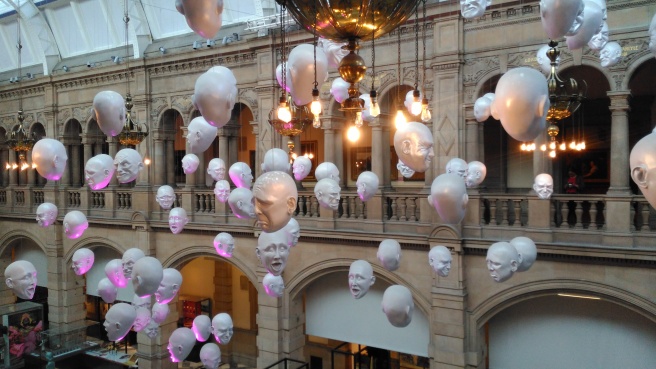 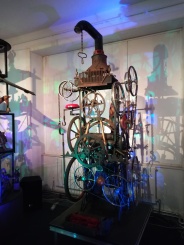 Last year our friend Paul had cycled with his brother around the Isle of Arran, and his enthusiasm about it had been infectious.  So in true Foons on Bikes style, we headed south before heading north.  After a quick stop and shop for some last minute camping needs at Decathlon, we joined and followed the fabulous National Cycle Network (NCN) Route 7 from Paisley to Ardrossan.  It is mostly along a now defunct railway line that winds it way through farmland, woodland, alongside lochs, more farmland and finally deposits you at the coast overlooking the Firth of Clyde.  We made our way to the ferry terminal and joined the crowds to board the ferry to Brodick. 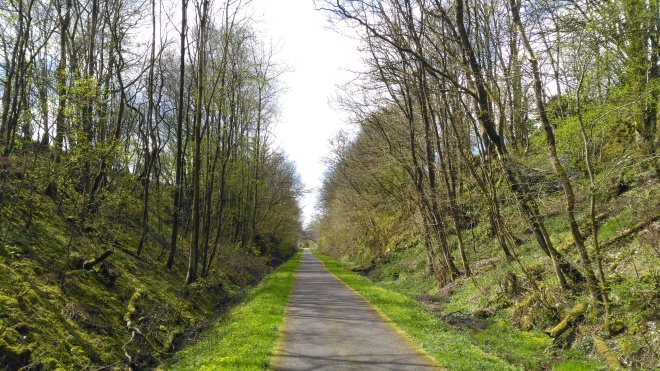 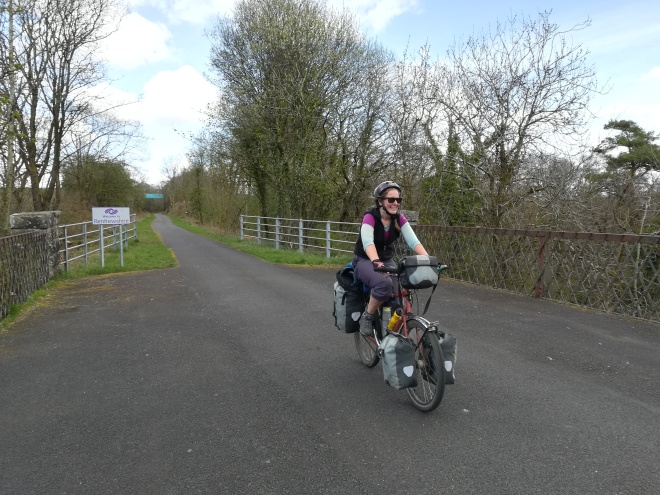 Nice path to the coast 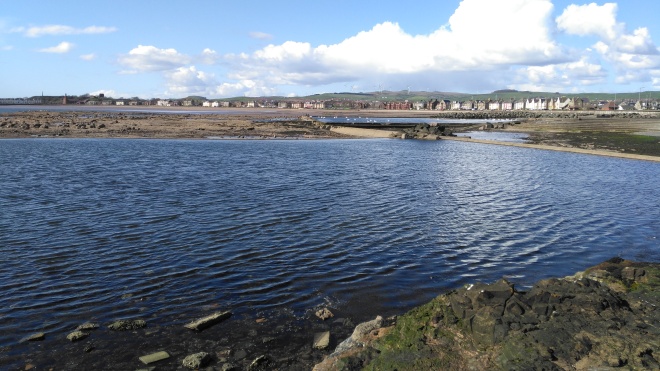 Made it to the coast

The peaks of Arran shone in the evening sun and we were elated when we were able to cycle along the coast looking for a place to camp for the night.  Wild camping is legal in Scotland and is something that should be protected and celebrated, as well as respected by those who are partaking in it.  We headed uphill for a bit and found our home for the night in what I termed the fairy glen, a gorgeous open woodland above a river canyon. It was great to be back in our tent in nature, and the joy and freedom of cycle touring flooded our hearts. 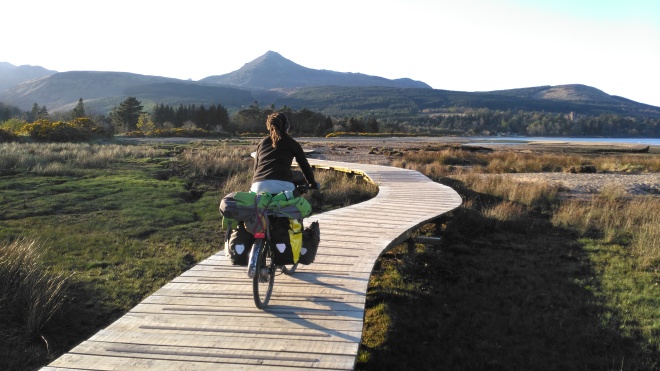 Looking for a campsite as the light fades

Our home set up

The moon from our magical place 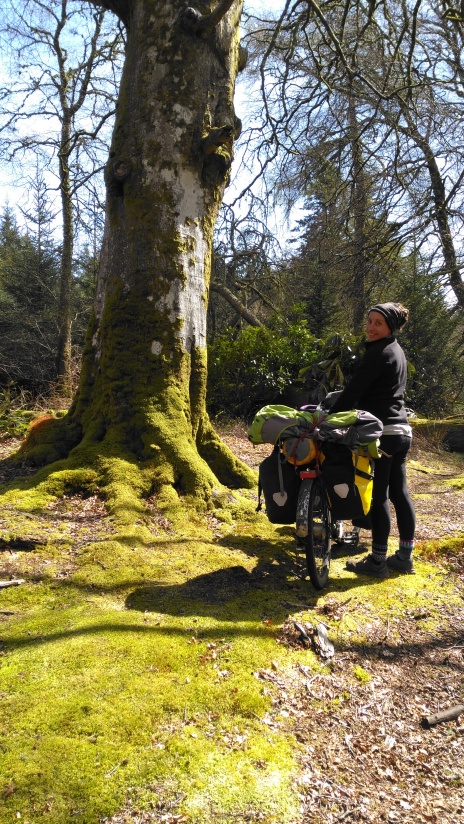 We rose with the sun to climb Goat Fell.  Well I hiked and Jude trail ran, at times I do believe she is part mountain goat.  Mist and cloud hugged the peak during our ascent and whilst we were up there it gave us fleeting windows of clear views of the surrounds.  We still had a brewery to visit and half an island to cycle so we headed down as fast as our legs, and then our bikes, would carry us.  The ales at the Arran Brewery were exceedingly tasty and we bought one of their puffin red ales to celebrate our climb.  After being warned that we faced legal trouble from the police if caught drinking in public (i.e. in front of the brewery), we poured the beer into our tea cups and supped them in the sun anyway.

Trying the beers at the Isle of Arran brewery

The rest of Arran was just as glorious as Paul had said.  It was a long climb over the middle of the island and we both had a little ego boost when we passed two people pushing their unladen Bromptons.  The joy of the descent after a long climb is always exhilarating and something that I would savour many more times on our trip through Scotland.  Pedalling freely on the west coast we watched the sun sparkle on the water, the seals flap and play on the rocks and the birds soar in the sky.  We pulled over when our legs said they could do no more and made our home on the seaside.  Jude had just managed to start a fire when the dark clouds above opened and the first of many rapid rain storms passed over us.  Luckily it didn’t dampen the embers and she had it going again in no time.  We made dinner, supped whiskey and watched the glorious sunset over the Mull of Kintyre – while Jude sang the song. 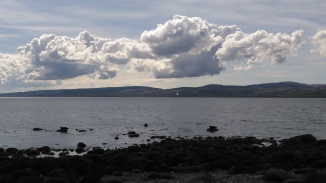 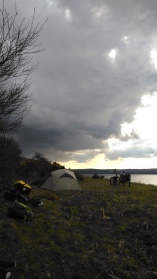 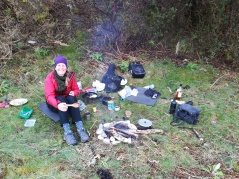 I’m physically a cold person who constantly has cold feet.  So in preparation for Scotland and Iceland I had devised a plan to shift this internal thermometer by getting in all the cold water I possibly could over the coming journeys.  This was the morning to test my resolve, so as the sun rose, so did Jude’s and my bare bum in the frigid waters off the coast.  I managed to stay in for about a minute before I couldn’t feel my body anymore, but the exhilaration of both being in and coming out of cold water was incredible.  Jude told me about an article that she read that likens such swimming to taking Class A drugs.  They may in fact be on to something.  Anyhow, after the dip we headed to the ferry port in Lochranza in time for a coffee and a vegan toastie, before boarding the boat to Claonaig.  We met a lovely cycle tourist who was partaking in his yearly tour of the Herbridean islands.  He was packed super light and had the whole thing sorted.  Made me feel like the Dirty Salmon was elephant sized and made wish that we had done more research about the other Hebridean islands – next time as always 🙂

Coffee and vegan toasties before boarding

Back on the mainland, our destination now was Oban which we hoped to reach in two and a half days, as we had organised to meet our new cycle touring posse there who would join us for the Outer Hebrides leg.  We could have easily followed the main road straight up to Oban, but what would be the fun in that?  And the traffic?  Wouldn’t the meandering and longer NCN Route 78 be much more fun and interesting?  Yes, yes it would.  So we did.

One of the many beaches

We cycled the quiet road along the edge of West Loch, surrounded by moss covered ancient birch trees with the occasional little hut surrounded by daffodils.  The road was undulating and we rewarded our bodies with a carb on carb lunch (no judgement please) at the headland overlooking Gisha island.  Jura soon came into sight and with the hot sunshine, the little beaches and the azure blue water, we could believe what the locals said about this area being like the Mediterranean.  But Scotland being Scotland, she was a changing.  We cycled into a dark grey rain storm as we climbed back over to the other side of the peninsula.  Whilst admiring the first of many lochans of our journey we noticed a thin covering of hail on the grass and the rain no longer seemed all that bad.  Got to love a change of perspective.  At Ardrishaig the Crinan Canal cycle path begins and we followed this for a few kilometres before pulling over beside it and pitching our tent for the night.  We enjoyed a few whiskeys in the late evening sun and chatted with the tourists and locals that were walking by. 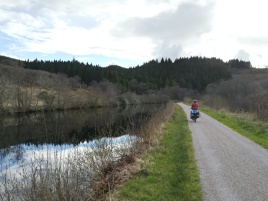 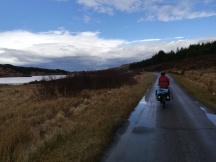 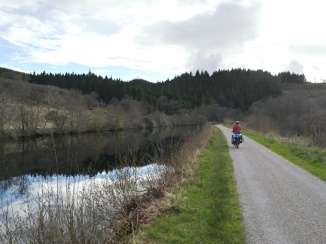 We pulled off the canal path at Bellanoch and cycled through moorlands and woodlands into the Kilmartin Valley, home to a plethora of Bronze Age historic sites.  We explored the stone circles, cairns and standing stones thousands of years old and when looking down on to the valley from the town you can see why people had chosen this place as their hunting grounds and then their home.  Unless you’re a die hard Bronze Age fan, save your pounds and skip the Kilmartin Heritage Museum – better to spend it in the cafe and read a book on the subject.  Overwhelmed with facts and history we headed back to the things we enjoy most – cycling and nature.  We followed the steeply undulating northern shore of Scotland’s longest freshwater loch – Loch Awe.  If the old forests hanging with moss had continued it would have been a perfect ride, unfortunately the clear felling of pine plantations was in full swing here.   The Old Roman cafe in Dalvich was  hidden gem, especially as their meal of the day was a vegan red curry, we polished off a few bowls and followed these with a few local ciders.  The ciders didn’t make the hills any easier, but did make them more enjoyable.  A walking path along a river leading to a picnic table was the perfect place to pitch for the night and our ritual of a wash, a whiskey, a cuppa soup, followed by dinner was now beginning to cement itself. 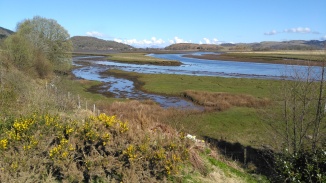 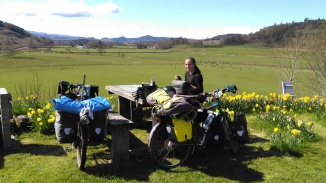 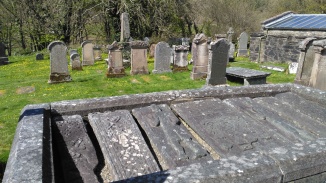 Despite my best efforts to change my internal thermometer, my feet were still freezing every night.  I have tried all the tricks – sleeping fully clothed, sleeping half clothed, sleeping naked, sleeping naked with socks on, but nothing was working.  It was at this point that a hot water bottle just made it on to the packing list for Iceland.  Cold feet aside, we had our last push into Oban to do that morning as the posse’s train was arriving at 11:30.  So back on the bikes and we were off down the back road through a lovely valley surrounded by sheep and lambs grazing and highland cows chewing cud.  The first were skittish and would run at the sound of our bikes approaching, the second didn’t care and we would have Mexican stand-off with them if they were ever on the road.  We always kept the bikes between ourselves and the cows, as those horns look like they would hurt if they were stuck into any part of our bodies.

We did make it to Oban on time.  The posse arrived bringing with them the rain.  But also the beginning of the next fun adventure – our group tour of the Outer Hebrides.