As hoped we rode off the ferry and back into the long awaited summer. Heat, wind and sun hit our faces and layers were quickly removed. Having grown up in a place with long, hot summers and recently lived in a place where summer lasts for about 2 weeks (this year being an exception obviously) I don’t think I realised quite how much I would miss the warmth and sunlight until our cold and rather dreary (weather wise) 5 weeks in Iceland. I don’t want to take away from Iceland. It is a magical place and I am so happy we went it’s just that the worst summer in 100 years put an ever so slight dampener (pun intended) on our experience. 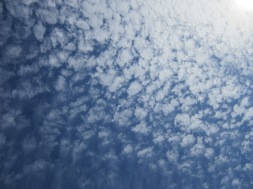 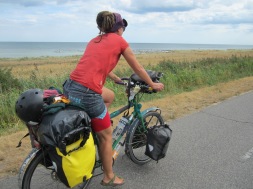 Our first stop was the supermarket where we bought all the things we hadn’t been able to afford in Iceland. Like hummus, fresh fruit and good bread. We gorged ourselves and then headed for the northern point of Denmark, Skagen. Here the North Sea and the Baltic meet and it was a popular place for impressionist painters in the late 19th century due to it’s unique light. We were mainly going because Carsten had told us we must. And Hannah’s parents had so kindly lent us their house (they were on holiday) so it seemed the perfect place to relax and re group after Iceland.

Arriving in Skagen after a swim in the sea and a day of sunshine our spirits were high. Having an entire house after 7 weeks in the tent was also complete luxury. I am deeply grateful for the kindness we so often receive. We relished the chance to drink wine in the garden, bake focaccia, do yoga, meditate, wash our clothes and relax. During the day we visited the seaside, ate sorbet, walked around the town (a popular tourist destination) and watched the sunset (where everyone claps when the sun finally sinks below the horizon). It definitely felt like a summer holiday. 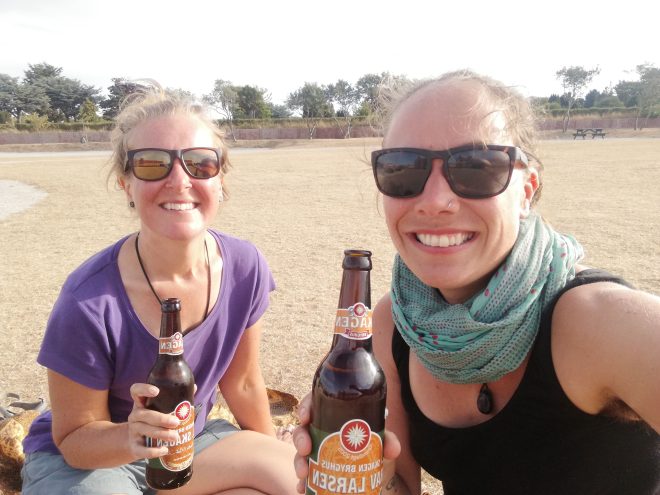 Craft beers in the park

Breakfast in the garden 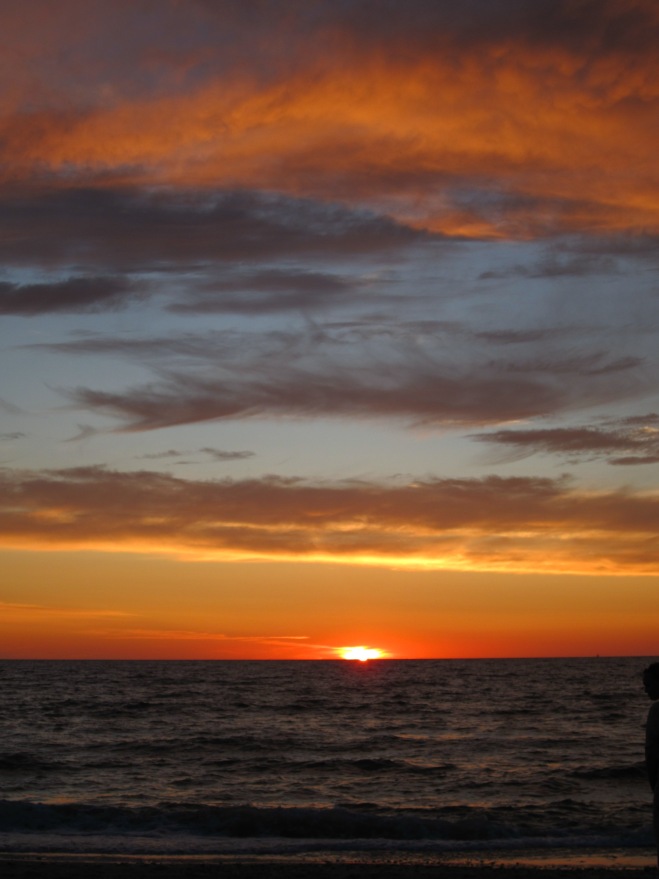 Watermelon anyone? All our clothes are being washed!

we can afford to eat salad again!

After a few days it was time to tear ourselves away from the luxury and head south. It was hard to leave but we were excited to see Hannah and Carsten in Aarhus and meet up with Bec who was coming to join us. The three days it took us to cycle down to Aarhus opened us up to a few surprising things. Firstly we found loads of fruit on the side of the road apparently going to waste, so we picked it. Next we found an entire dumpster full of artisan bread outside a supermarket, we also helped ourselves to that. Then, on an afternoon swim we found mussels and after some discussion we helped ourselves to a few of those too. Mussels are one of those borderline things where due to a lack of central nervous system some articles argue they are more like plants than animals. They don’t for instance react or move away from painful stimuli. And from an environmental perspective they rate quite well. I love mussels (we both do) and so after some deliberation we took a few of those too. It felt wonderful and surprising to have been able to forage a large part of our food in a country as developed as Denmark.

Foraged (aside from the bread!)

Fresh bread from the dumpster

At night we slept at some of the best shelters we had encountered yet. One was like a mansion cubby house, built in the dunes with a view out to the sea. Another boasted running water, a toilet, multiple shelters and even recycle bins (so European). The landscape itself was baked dry from the long, harsh summer. The browns, yellows and bright blue of the sky reminded me more of home than how I thought about northern Europe. I must say, I enjoyed it immensely. 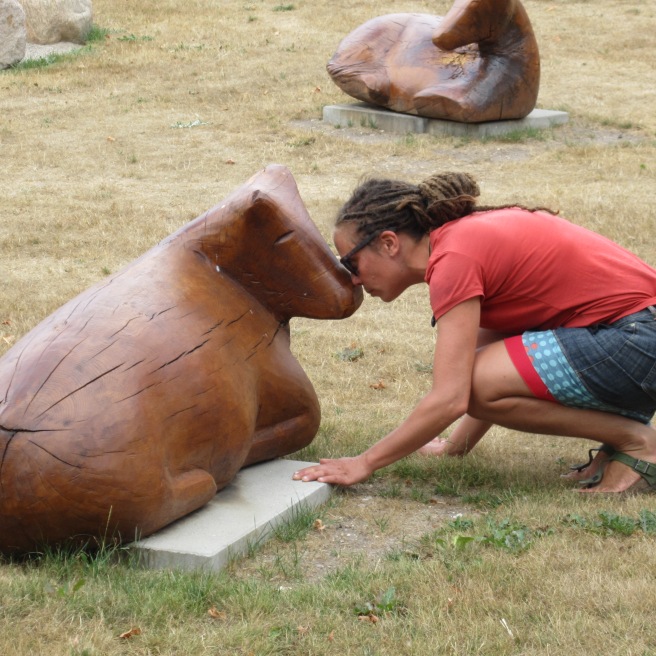 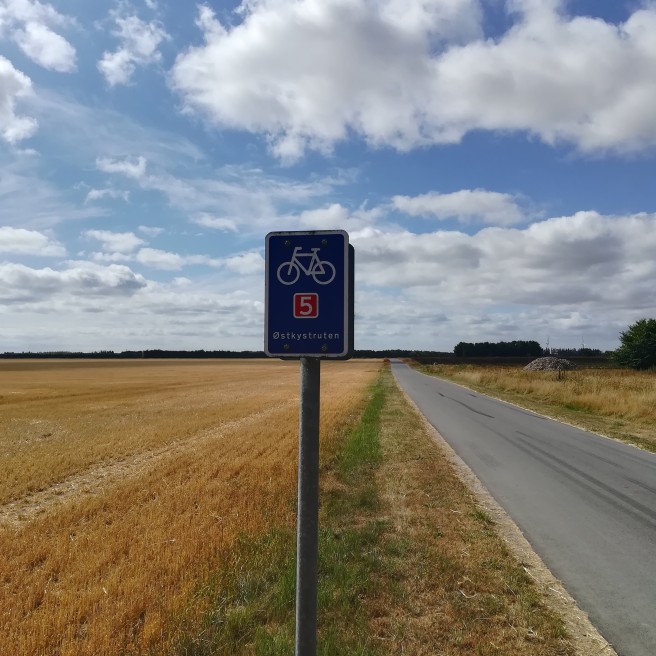 In Aarhus we were warmly greeted by Hanna and Carsten and proceeded like usual to mess up their lovely flat with our chaotic panniers and dirty clothes. Being cycle tourist themselves they completely understood and pointed us towards the washing machine and shower. It was wonderful to share food and wine and catch up with friends. It had been a while since we had spent any time with people we knew. 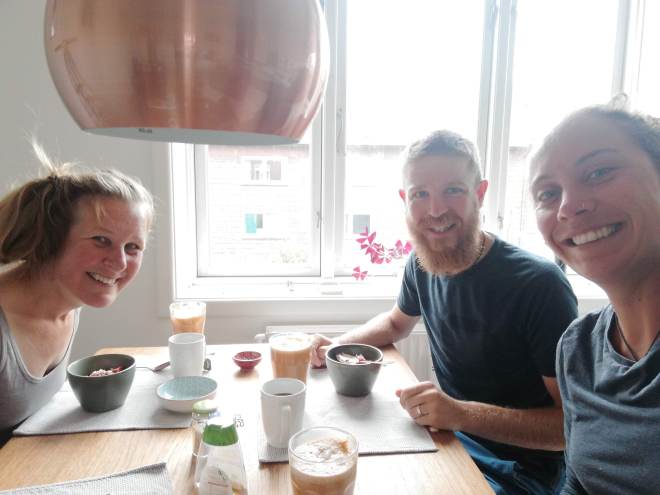 So happy to see Carsten

The following day we embarked on a mission that could have gone horribly wrong. For a while now Astrid has been riding on a seat that is too low. Unfortunately we didn’t know that one needs to regularly grease the seat post, otherwise the aluminium post and steel of the bike sheer together in an unmovable mess. After consulting Carsten (who knows a lot more about bikes than us) and visiting his cousins bike shop for tools, Astrid bravely cut the seat post off. Now we were committed. In order to continue our trip, we needed to saw the remaining seat post out of the bike in order to fit a new one. At least 10cm of the post (still firmly stuck in) needed to be removed. It seemed an easy enough task and Astrid and Carsten started off in high spirits. By 7pm with many hours already spent seemingly achieving nothing, a mild panic set in. What would happen if we couldn’t get it out? Would Astrid’s bike be completely fucked? And what about Bec, who was arriving the next day to cycle with us? 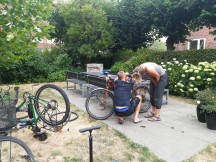 While Carsten and Astrid slaved away I made food and occasionally had a go at sawing myself. I think we all went to bed thinking about that damn seat post.

The next day armed with fresh enthusiasm that a rest brings, Carsten and Astrid rode off to the bike shop to use some more heavy duty tools. Several hours later I got the good news that they had been successful. What a relief.

We then picked up Bec and proceeded to have a lovely evening and night, exploring Aarhus and eating lots of delicious food. It was wonderful to spend a few days with Carsten and Hannah and sad to say goodbye. Hopefully they will be able to join us on the road at some point. 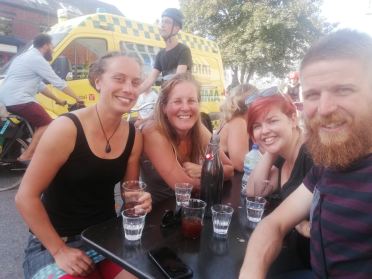 The summer holiday vibes continued with Bec as we rode towards Copenhagen, hugging the coast. Pedalling was followed by a swim, then lunch somewhere by the sea. In the afternoons there was sorbet, or sometimes beer. We also continued to dumpster dive, finding an unbelievable amount of unspoiled food. In the evenings we found shelters or forests to camp by, cooking up delicious curries, washed down with beer. Although not used to cycling such big distances, and not on her own bicycle, Bec, like always was amazing. She powered through with high spirits, even though at times it must have been hard. It’s always such a pleasure to share our lives with friends and we feel so humbled and grateful that Bec made the effort to join us. 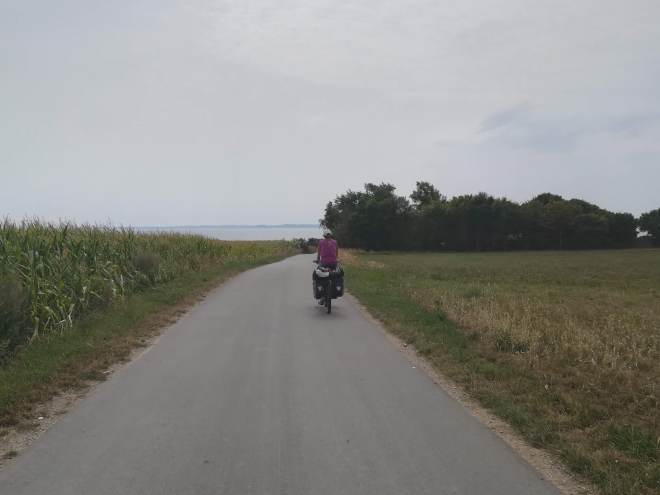 Fresh veg from the side of the road

Hiding from a summer rain storm 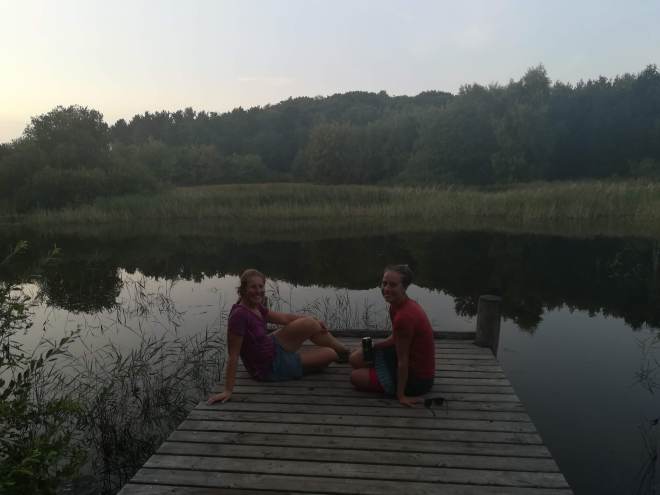 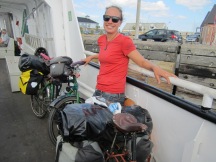 Our last day into Copenhagen we even managed to “tourist”. Exploring the castle Hamlet is set in and the Louisiana MoMA (which is amazing). Our good luck also continued, or should I say Carsten continued to be amazing. We had no plan of where to stay in Copenhagen. Warmshowers, while excellent has it’s limitations. A popular city in the heart of the European summer; frankly many hosts are themselves out on cycling holidays. After sending several requests with nothing, we had left Aarhus with nowhere to stay but deep down I knew something would work out. And it did. Carsten’s cousin had a small summer cottage 15km from the centre and she just happened to be going away that weekend and was happy to lend us the cottage. Perfect. It felt wonderful to have our own place in which to relax after three awesome days of cycling. 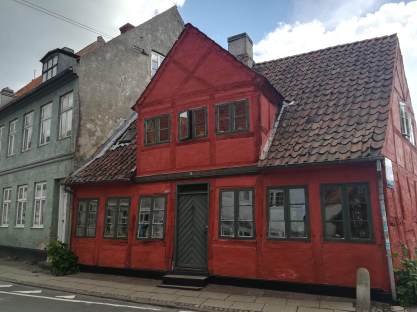 Our little cottage outside of Copenhagen

Did we kill Bec?!

After exploring Copenhagen and gorging ourselves on an all you can eat Chinese vegan buffet it was time to say goodbye to Bec. It was sad to see her go but there are already plans in the working to meet again in November. 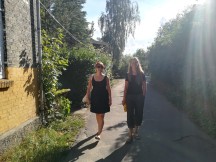 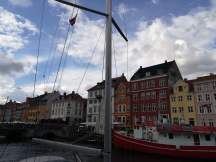 We explored Copenhagen a bit more after Bec’s train departed and then retreated to our cottage just before the thunderstorm hit and it rained all night. Now it was time to make a decision. We had been talking for days about where we would head next. Our original plan had been Sweden and then the Baltic States, followed by Poland and then south. We looked at maps and counted kilometres and considered the eventual arrival of autumn. By chance Astrid had found a Danish Island called Bornholm from which one could catch a ferry to Poland. We also talked about riding through northern Germany to Poland (to save on ferry fees). Or perhaps sticking to the original plan. Eventually we decided that in all reality we probably didn’t have enough time to really explore the Baltic States and Sweden properly as we wanted to be in southern Europe to celebrate Astrid’s 40th in November and Egypt probably by early to mid December. Bornholm seemed like an interesting and direct way we could get to Poland and from there continue south.

All the tourists crowding the little mermaid statue! 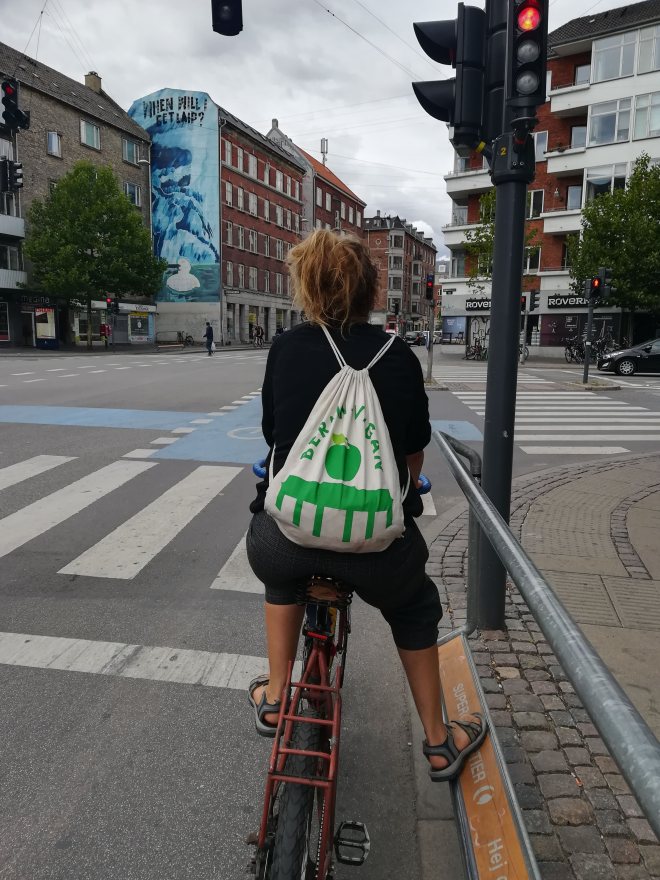 Copenhagen is a cyclists dream

After a prolonged morning packing we headed off towards Koge from where we would catch the overnight ferry to Bornholm. It was a fairly uninspiring ride, although we managed to successfully dumpster dive a ridiculous amount of food (including still cold and in date salmon) which we cooked up at the ferry terminal. We got a lot of comments about how good our food smelt. If only they knew our entire meal bar the garlic and oil had come from the dumpster, destined to rot and go to waste.

At the ferry terminal cooking

Being seasoned travellers, or maybe because we don’t care Astrid and I both slept well on the ferry. Unlike our fellow passengers who uncomfortably (it seemed) curled up on seats, we had brought our mats and sleeping bags and made ourselves quite at home, sleeping more or less soundly as the ferry headed eastwards.

On the ferry to Bornholm

Bornholm proved to be as wonderful as every Danish person we met had told us it would be. On our first morning we cooked breakfast on a pier and then swam in the sea, followed by a lovely pedal through the forest. The landscape was beautiful with sea cliffs, forests and gorgeous villages. We explored a fort, marvelled at the old smoke houses and spent a delightful afternoon relaxing in a free camping spot in a clearing. 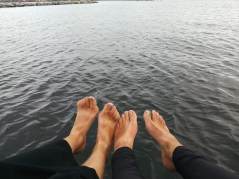 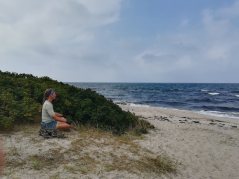 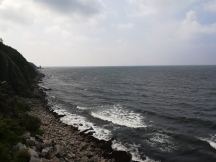 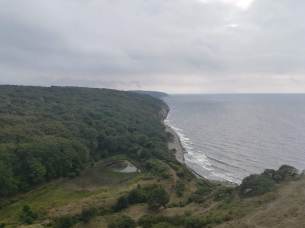 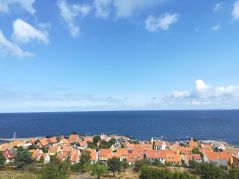 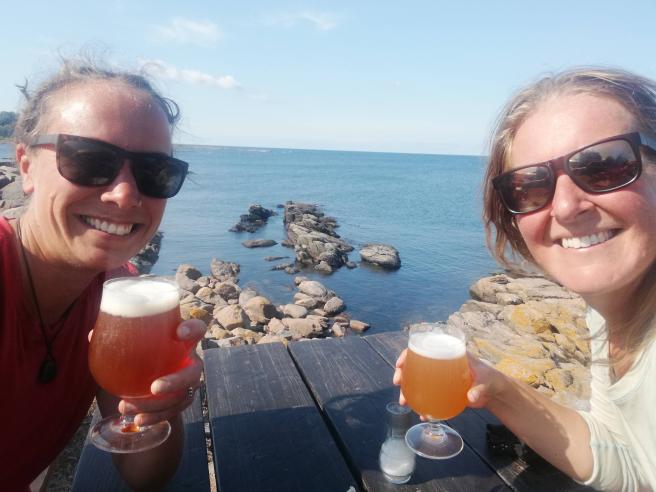 After only a short time on Bornholm it was time to finally bid Denmark farewell and head to Poland. Neither of us had ever been and we were super excited to be moving on to this large eastern European country of which we knew very little. 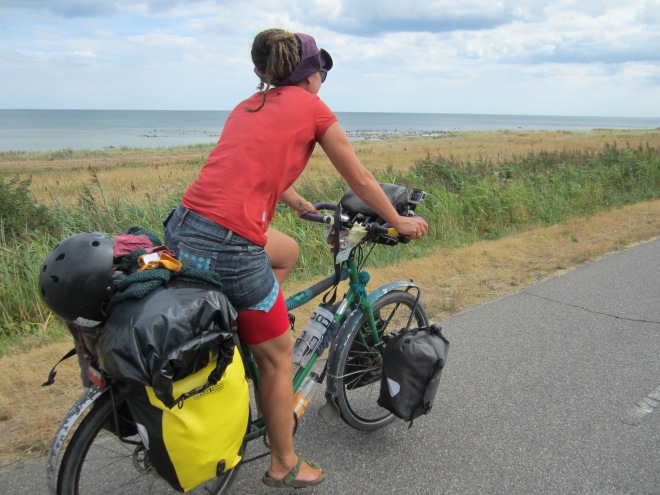 One thought on “A Danish Summer Holiday”