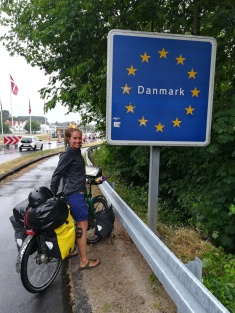 It began raining just before the border and continued steadily for the next two hours or so that it took us to reach Carsten’s (a friend from London) family home in the village of Bolderslev. Wet and dirty we were welcomed with open arms by Carsten’s mum Christa and his sister Lea. It was a familiar feeling of deep gratitude from almost complete strangers and we appreciated the hospitality so much. Not only could we shower, escape the rain, wash our clothes, but Christa had even cooked us a vegan meal. Amazing. I will never stop being so utterly thankful and humbled by the kindness we receive.

Hmmmm this was just over the border!

We woke to sun and after a lazy breakfast (sampling many Danish treats) Christa and Lea left for work with goodbyes and instructions of how to lock up. Astrid had to run to the post office where her new bankcard had miraculously arrived in 4 days from London and both our chains needed a cleaning. After some bike maintenance and random chores we had neglected so far, it was time to head off.

So kind to be hosted by Carsten’s family

To cycle from the south of Denmark to the ferry port of Hirtshals we had decided (on the advice of Carsten) to take the Haervejen which was an ancient trading route which in the past was actually a series of small roads linking the south to the north. Now it is a biking and hiking path traversing through the picturesque Danish countryside. I like taking trails like this as they are often off road and it’s lovely to just follow signs rather than having to use maps on our phones and remember routes (something I am not super good at!). We set off and were soon winding our way through rural Denmark on small roads and tracks through the forest, passed farms and into villages and towns. While the pressure was still on to make it to Hirtshals we felt more relaxed. Germany was behind us and all that remained were a few 100km. 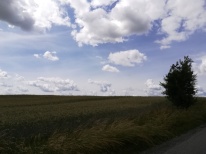 The first day in a new country is always a little bit the same and a little bit exciting. Being Europe, the differences aren’t huge but important none the less. Firstly, how much is our money worth? We used to work from Australian dollars but now use pounds (which makes us feel falsely richer). Next, is there a Lidl and what do they sell, especially do they sell hummus and what vegan products do they have? Is the bread good? And beer? How friendly are car drivers and what is the bicycle infrastructure like? And lastly, how easy is it to wild camp? 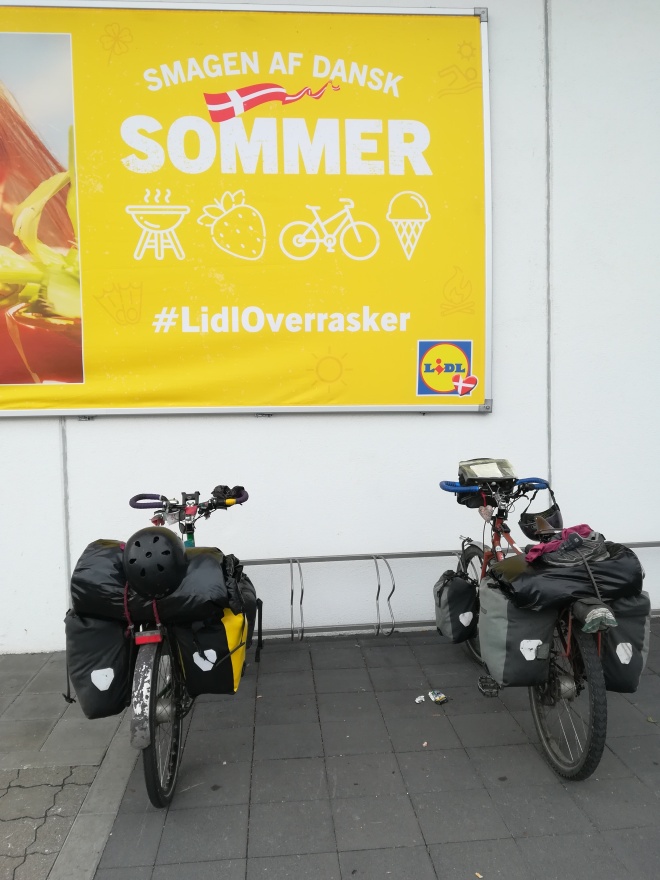 We really love these buildings, found all over the countryside 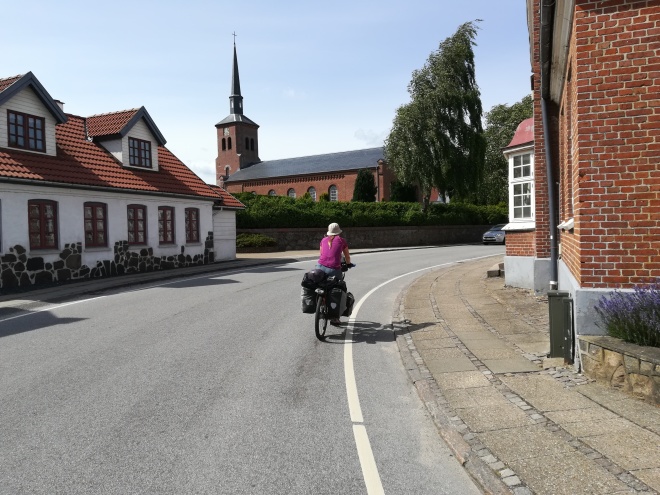 Denmark is more expensive than Germany (not hard), there is indeed Lidl (less vegan products but it does have hummus), there are loads of bike paths, drivers are mostly good,  but best of all, wild camping is amazing in Denmark. This is due to something called shelters. Basically a system of shelters built all over Denmark where you are allowed to free camp. These shelters can include literally a wooden shelter in which to put your sleeping bag, a fire pit, wood, access to water, toilets and sometimes even a shower (we’ve heard). They are amazing and an app lets you view them on a map and see what is available at each shelter (it’s in Danish but pretty easy to figure out). We are used to hiding ourselves away in forests or parks so this was utter luxury.

Our first night camping in Denmark found us stumbling across a shelter (we had been planning to go to another one) in a clearing in some woods, with a fire already going and some friendly Dutch cycle tourists who also happened to be ICU nurses. They offered us dinner and some kind of spirits. A night of merriment ensued.

Travelling by bike in many ways is a microcosm of life; one minute everything is going along smoothly, the next you are wondering what the hell went wrong. You feel the highs and lows acutely because there is no hiding, just you and your bike out in the world. While cycling in Europe these highs and lows are certainly less extreme,  but they do still exist. From our perfect camp in the woods by a fire, we went to sheltering outside a supermarket in torrential rain, dirty, cold and wet. To top it off I got a flat tyre.

The not so glamorous side to bike travel.. 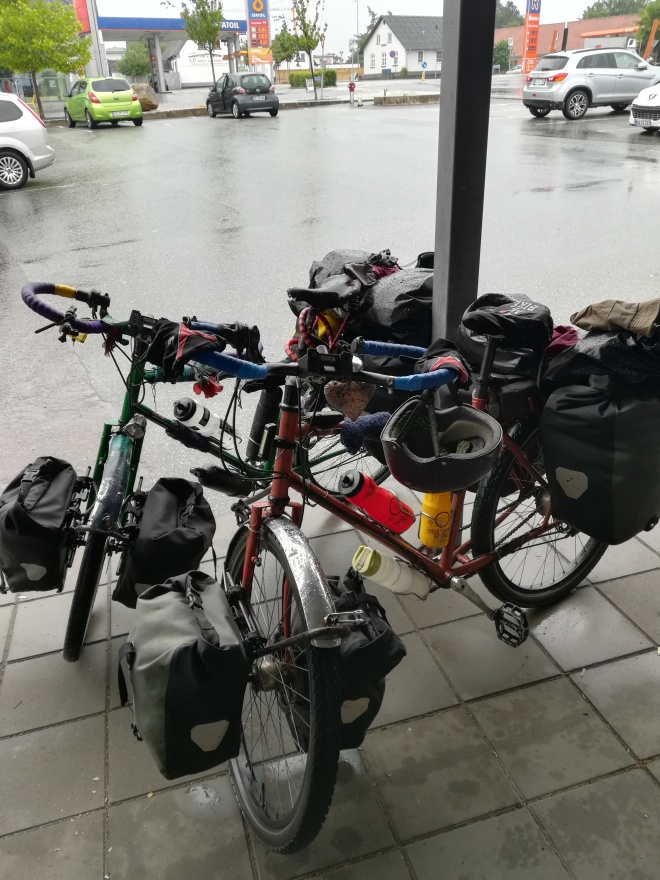 Sheltering in a supermarket

But from a relative low we pushed back out into the summer storm, pedalling through beautiful woods and sheltering under trees when the rain got particularly heavy. It’s often about shifting or adjusting your thinking, too. While being wet can be uncomfortable, it wasn’t really cold and the strength of the thunderstorm was an acute reminder of the power of nature and always makes me feel awed and inspired. 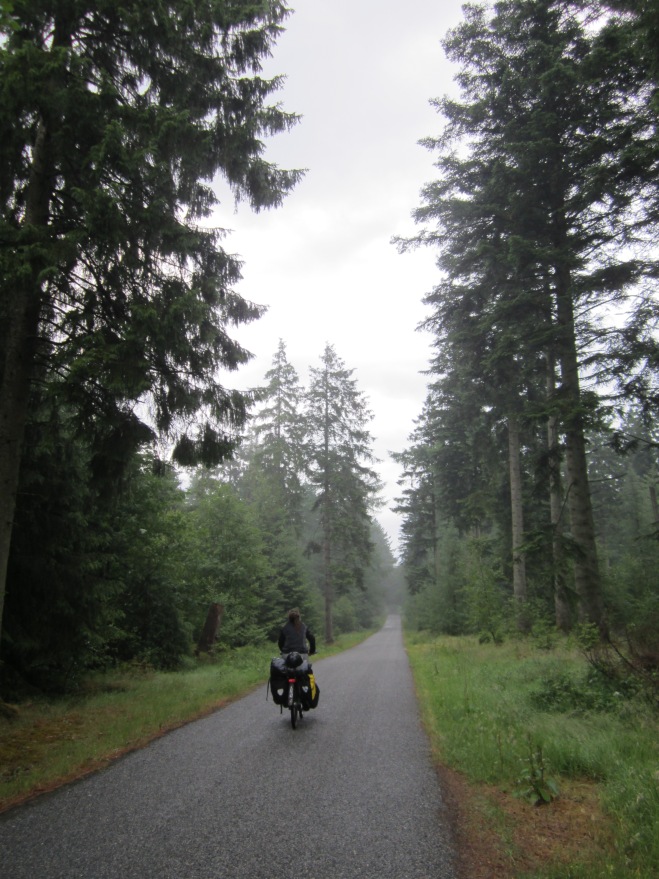 Sheltering from the worst of it

By evening the rain had ceased and we reached another shelter in the forest and met Alex. Alex is a Ukrainian asylum seeker and a reminder of the (potential) grace and strength of humanity and the cruelty of systems. After fleeing war and seeking asylum, Alex who is an engineer by trade has been forced to live on the road (he rides a big Danish bicycle, staying at shelters and occasionally with families). The road to us embodies freedom, because we choose it, and can equally leave at any time. Alex does not have that privilege and is instead relying on the cruelly slow bureaucratic nightmare that is seeking asylum in todays Europe (not that Denmark is even close to being the worst).   Until his asylum claims are dealt with (several years so far), he cannot leave the EU, nor really work, or see his children. His life is effectively on hold. It was a sobering reminder of our own privilege. We spent a wonderful evening sharing a fire, food and conversation with this most excellent human. 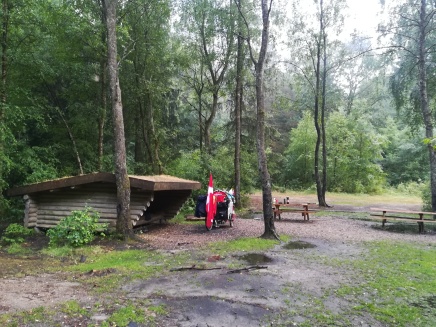 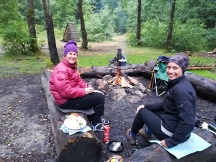 Our ferry departure was getting closer so on our last two days we decided to ditch the Haervejen and take a more direct route north. We were still on small roads and often bike paths. Denmark is certainly up there with cycling infrastructure. I would put it third behind Netherlands and Germany for it’s overall network of paths and roads (obviously Copenhagen is special and right up there with bike awesomeness). 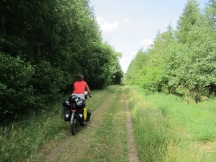 It was about this time that Astrid became a ‘eco warrior cyclo bum’ (her phrase). What this meant was that she would collect cans and bottles on the side of the road, carry them in a plastic bag on her bike and then recycle them at supermarkets. Most cans and bottles have ‘pant’ which means that you get money (in the form of a refund docket) back and can then spend it at the supermarket. Not only does this clean up the environment, it also gives us some krona. She became quite obsessed and I would have to be careful when cycling behind her as she was likely to slam on the brakes and go diving into the woods to retrieve a potential ‘pant’. Sadly, some of the cans don’t carry pant but we pick them up anyway as it seems the right thing to do. 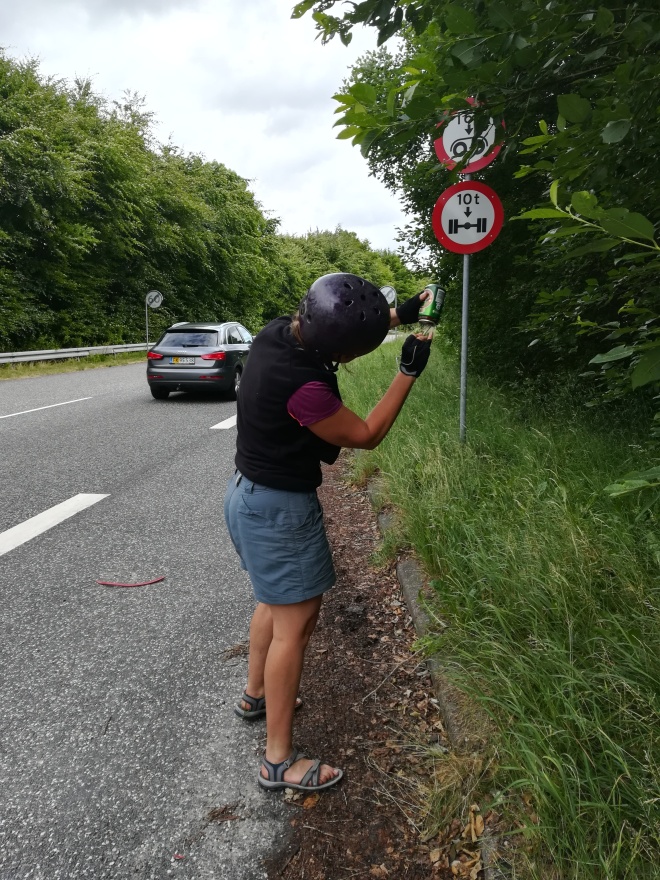 Trying to convince the slug to leave the can..

On our final evening before leaving for Iceland we met up with fellow bicycle travellers, Lucy, Colin and their dog Tilly. We had met Lucy and Colin at the cycle touring festival in the UK and stayed loosely in contact via social media. They are on an extended honeymoon/bicycle adventure through Europe and were headed towards Norway, which perfectly coincided with our route towards Iceland. So we decided a catch up was in order on our collective last night in Denmark. We met at a shelter which was in the middle of a village park and even had a fire pit (but randomly no toilet). There was lots to talk about and we all banded together to cook up a vegan feast complete with hot chocolate and a delicious dessert. It’s always such a pleasure to spend time with like minded people and we talked late into the night. 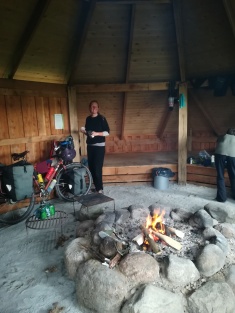 Lucy, Colin and Tilly left early the next day to catch their ferry to Norway. We pottered about before rolling the 4kms down the hill to Hirtshals where we stocked up on last minute things in the supermarket (Iceland is rumoured to be insanely expensive) before heading to the port and joining the queue for the 2 day Smyrill Line ferry to Iceland. Exciting! 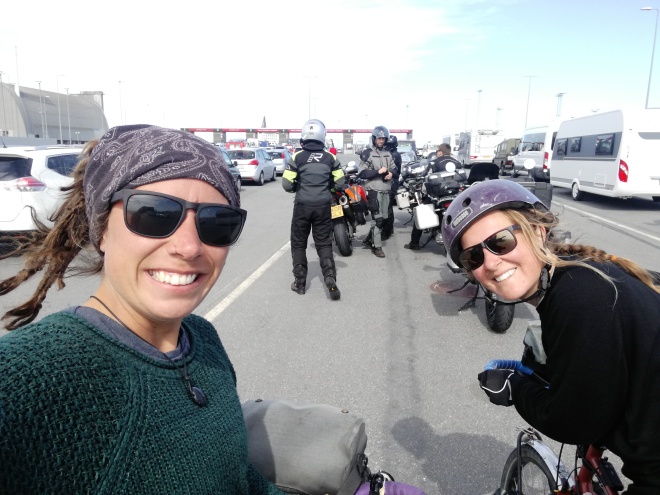 In the line for Iceland!

5 thoughts on “Denmark is Awesome”