Astrid and I love beers (in case this was somehow missed) and now we were finally entering the country reputed to have some of the best beers in the world. We were quite excited to say the least. To reach Belgium we had to climb out of the picturesque valley we had been cycling through the previous day. It was a beautiful summer’s morning, climbing felt great and at the top we were greeted with a sign to say we were in Belgium, followed by 16km of downhill. Nice way to enter a country!

The first part of Belgium is still German speaking so it felt very familiar at our first bakery stop. This gives way to the French language, and also sadly deteriorating cycle ways and driving. As we struggled to follow the bicycle directions and bumped along rough, narrow roads with drivers passing too close we knew we were definitely no longer in Germany.

Down hill we go!

That day we pedalled for many long hours. Sometimes on roads, sometimes trying to follow badly signed bike routes. Eventually we ended up on a river, but even here we had to sometimes back track as the path would suddenly stop and we would have to go around and pick it up again somewhere else. I guess we had been spoiled. 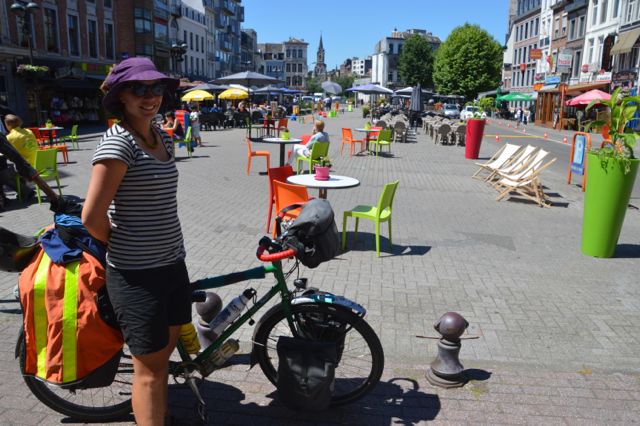 Still, the countryside was pretty and we found a lovely camping ground right on the river. The people were super friendly and laid back. We enjoyed a curry and watched the night fall gently, all three of us feeling pretty exhausted. It had been a long few days. Our whole reason for coming to Belgium was to visit Stephanie who we had met in Dushanbe while she was doing an internship at the EU delegation there. One more big push and we would reach Stephanie’s home town of Enghien.

We woke up feeling lethargic. Vari opted to take the train – wise move. Somehow foolishly Astrid and I decided to take the canal cycle route which was 130km instead of the 100km road route. I guess canals sound more romantic than roads but our day was far from romantic. I like to refer to it as The Canal Day of Doom. 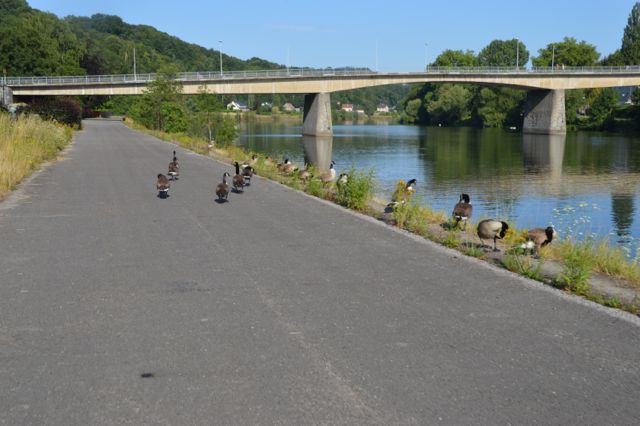 Following the river had its great moments

Firstly I had no energy and could only hobble along until I had consumed most of the contents of the supermarket we stopped at. Then Astrid had a flat. This was followed by a wrong turn and needing to back track, all in combination with a roaring headwind and a terrible highly resistant cycling surface. The going was slow and painful and I longed to hitch hike on one of the canal boats. We were both tired and I was quite grumpy as well, cursing the canals under my breath.

Finally towards the evening we decided to call it quits on the canal path. It was just so rough and slow. Once away from the canal the road was much smoother and even the hills were a relief. By the time we reached Enghien at 10pm, it was 13 hours after we had set off. We were greeted with open arms by Francoise and Philip and had a wonderful reunion with Stephanie. After food and showers we both collapsed into bed. I know I was utterly spent.

Our time in Enghien with Stephanie’s family was lovely. On the first morning we went for BBQ and drinks at a friend’s place and then to La Semo, a music festival that was on in Enghien that weekend. It was super lovely and relaxed. We wondered around, ate, drank Belgium beers and listened to music. Later on Stephanie, Astrid and I danced the night away. 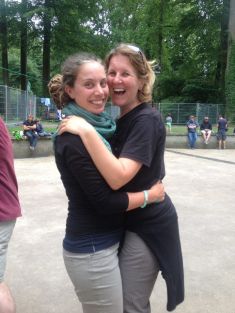 We squeezed in a trip to Brussels to visit an old friend of Astrid’s and his wife. Arnie and Aiva showed us good places to eat and drink in Brussels and we thoroughly enjoyed our brief encounter with the city. 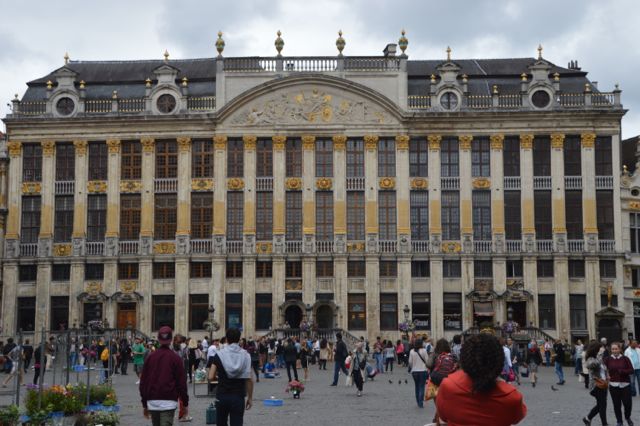 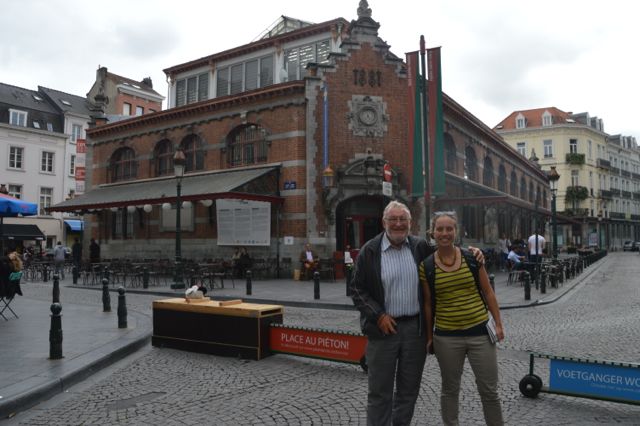 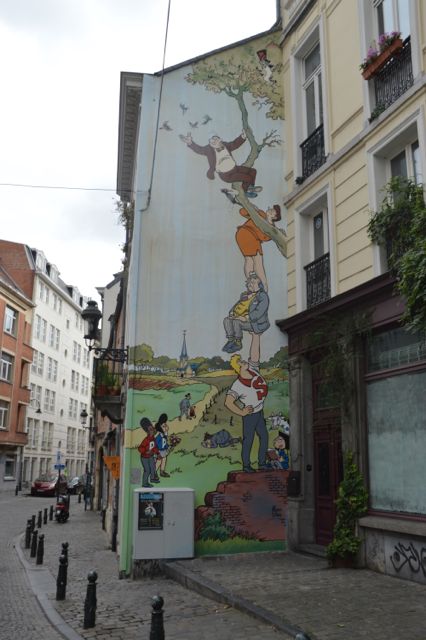 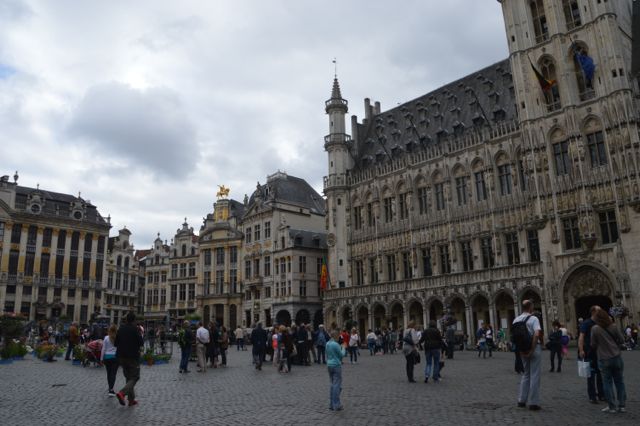 Well rested and completely spoiled by Francoise and Philip we left Enghien and Wallonia (the French speaking part of Belgium) and headed into Flanders. This is the Flemish speaking part and the difference in attitude becomes apparent. We were told the French part likes to have fun, party, eat good food. The Flemish part works hard to have a nice house. I don’t know if this is strictly true – but the Flemish do appear to have very neat and pretty houses! 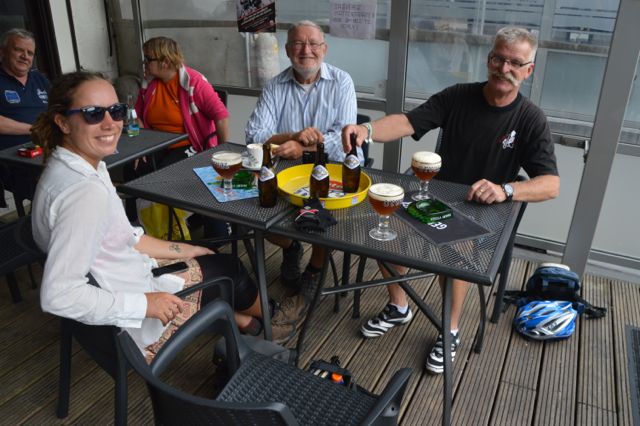 Hills soon gave way to much flatter country as we cycled towards the border with The Netherlands. For our last night in the country with a reputation for the best beers in the world we bought a few to sample and found some forest in which to pitch our tent. 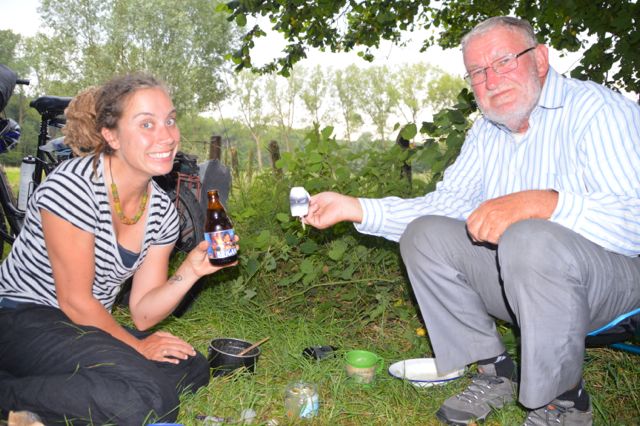 As I drank my beer and looked over at the green fairy, panniers open with clothes and pots spilling out, the darkening sky, Astrid beside me, Vari still putting up his tent, I felt a little sad. This perfect simple life, where everywhere can be your home and your needs are so basic is coming to an end soon. I am certainly going to miss it. 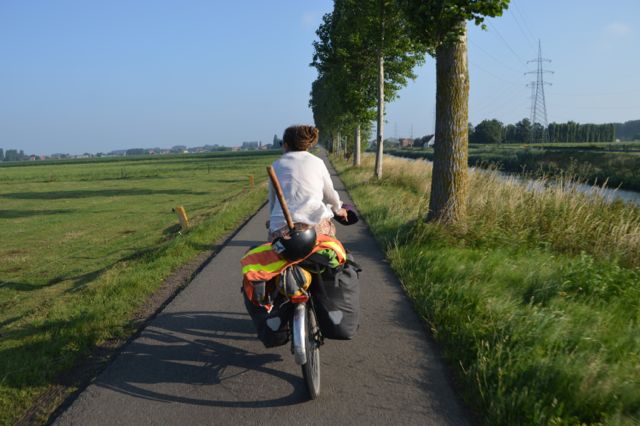 6 thoughts on “From Belgium with Beers”