Signs are there to be climbed!

After climbing all morning through the beautiful mountains of Bosnia, the first thing I thought as we free wheeled down the road on the Montenegrin side was; it’s not as beautiful as I expected. Kind of harsh I admit! The landscape was rocky, dry, and quite bare. Not the Montenegro I remember of 2015. Of course, first impressions are often wrong.

Happy to be back in Montenegro 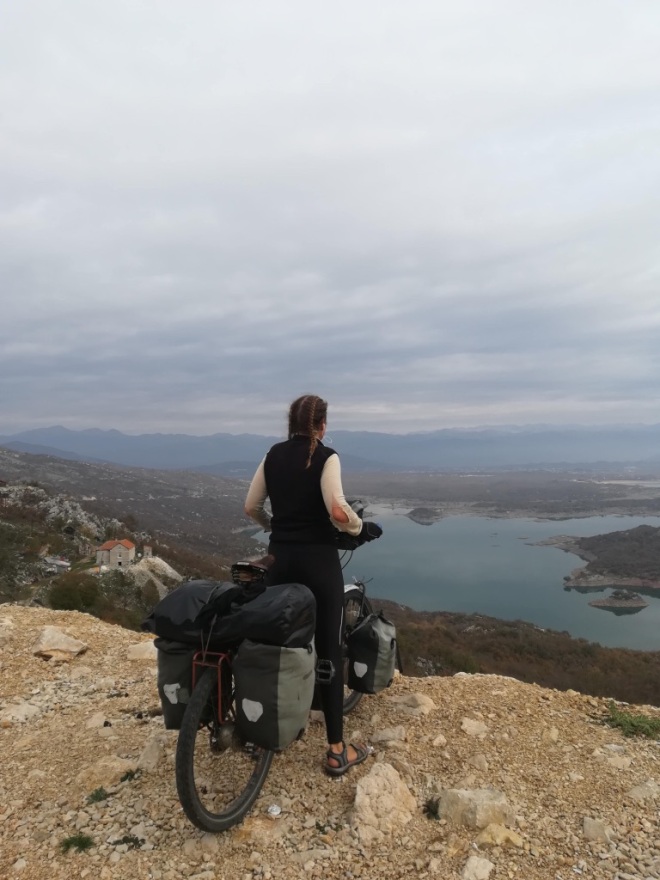 Overlooking a dam on our way into Niksic

After snacking on left overs, we rolled into Niksic in search of potato burek (second lunch) and an ATM. We found both, with the potato burek possibly being the best we’ve ever had (big statement I know!). While in the bakery, unashamedly scoffing our second helping, a guy came over to talk to us. Petar was a local Warmshowers host, and after chatting for a bit, he offered to show us a scenic route to Podgarica. We happily accepted.

Petar showing us the way

What followed was up there with some of the best and most scenic cycling we’ve done. We followed Pieter up a small, smooth road (Montenegro has ridiculously good roads) as it wound itself gently up the mountains. The views were magnificent and I felt dwarfed by the sheer beauty of nature all around us. By the time we reached the Ostrog monastery it was late in the day, making Podgarica as we had planned was looking unlikely. It was one of those moments where you choose just to embrace the moment and go with the flow of what is being offered up. Petar showed us the church and explained a little bit about his religion. Although neither of us are the slightest bit religious, I do appreciate the sacredness of churches, temples, mosques, and the beauty of the architecture and art work. The icons in orthodox churches are impressive. And it has an air of mysticism I did not expect. 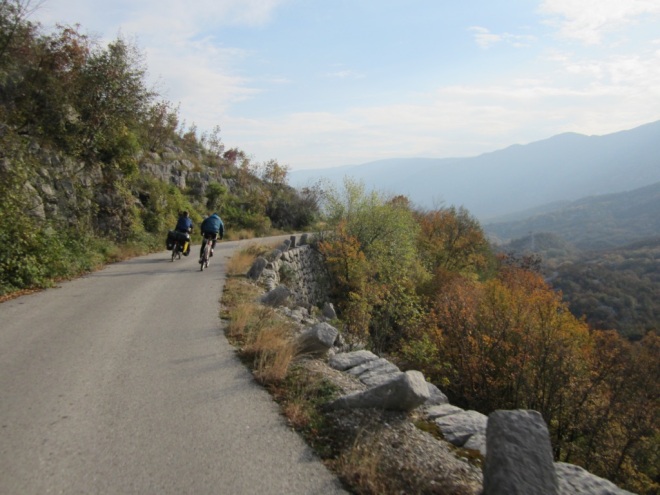 So fun and so beautiful 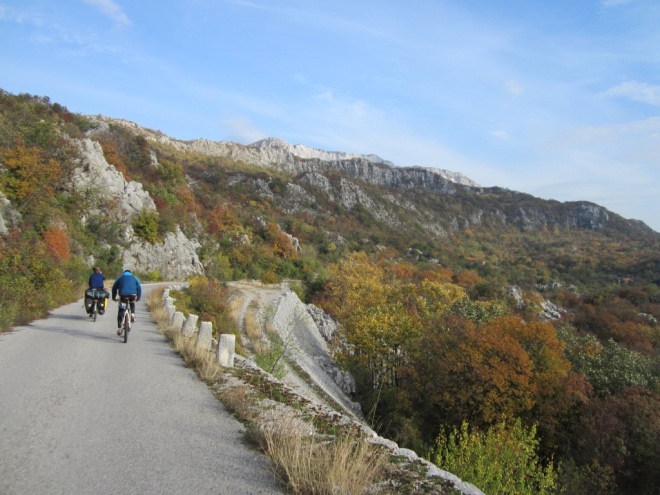 After Petar had a quick chat with a priest, we all ended up being invited in to eat in the monastery dining room. I can only imagine this is where the monks eat? There was some praying and then we were served up delicious food, including quite a lot of wine. Some people joined us, and it turns out the woman was an Abbott from Russia. So that’s how we ended up sharing wine and food with a Russian Abbott and some monks in an orthodox monastery in Montenegro. You never quite know how your day will turn out on the road… 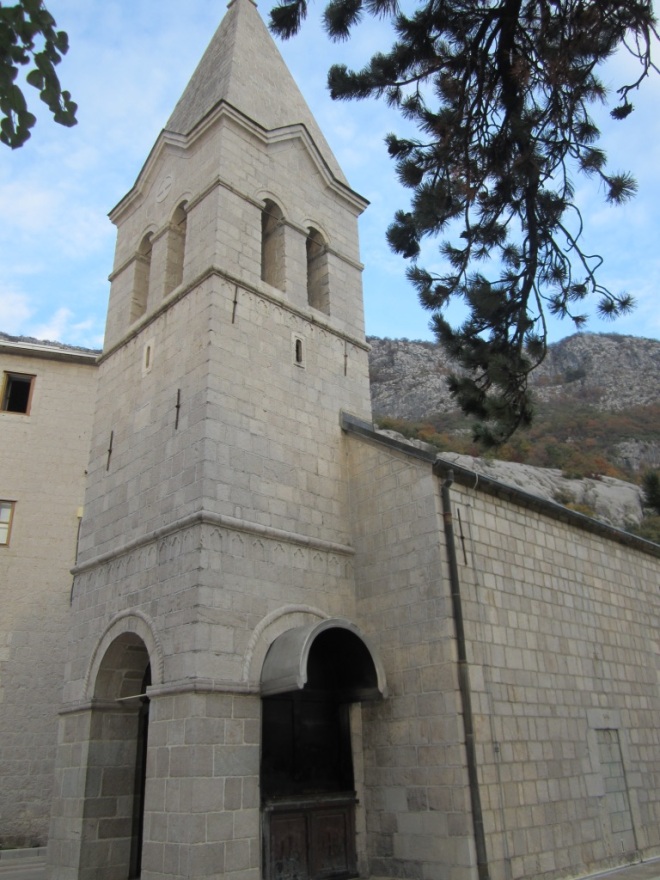 A church at the monastary

Later on we explored the high monastery, which is impressively cut into the stone. It is a really beautiful and spiritual place and a site of Pilgrimage for Christians, as Saint Basil of Ostrog’s body is there (rather creepily in an open coffin). He is apparently the saint of Miracles.  Petar, being the generous and humble guy he was, organised for us to stay in the monastery dormitory that night. He also stayed as he is currently in between jobs and had no plans. I love how he could just spontaneously join us. We spent the evening drinking tea and talking; about religion, the difference in our lives, relationships, travel, anxiety, love…Petar is not one to waste time on trivial matters and it was refreshing to talk to someone obviously so smart and interested in everything. 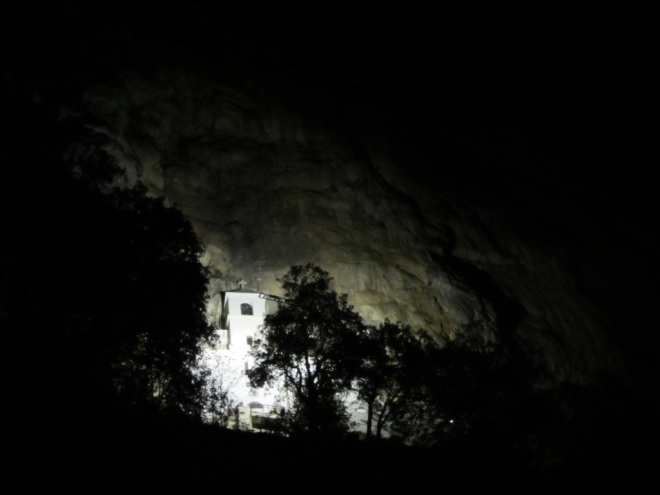 The high monastary, built into the rock

Outside the monastery where we slept

In the morning singing from the church reverberated over valley in a wonderful and other worldly manner. The sun shone, promising another perfect autumn day. It felt like we were outrunning the bad weather again. The three of us left early and headed down the mountain and valley into Podgarica, the Montenegrin capital. Here we ate lunch in a park by the university that Petar had once attended. 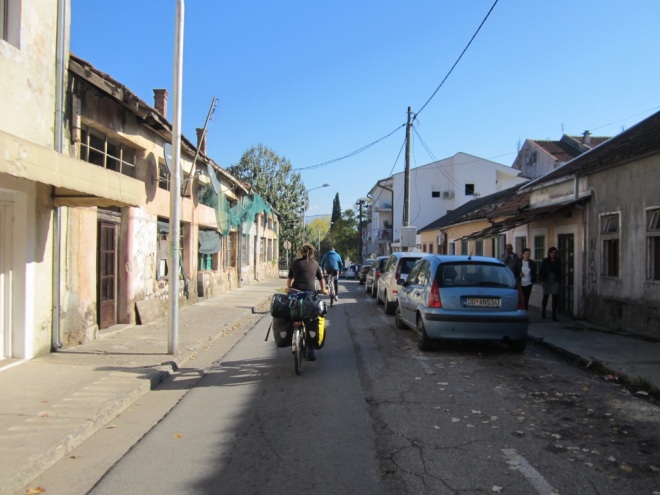 On the road to Podgarica

Outside the church Petar showed us in Podgarica

It was now time to head to the Albanian border, just over 20km away. Petar decided he may as well join us right to the border. Unfortunately he hadn’t brought his passport, otherwise I think we would have continued cycling with us! The road out of Podgarica was awful at first, fast and busy, but luckily improved as we began climbing out of the valley and back into nature in the late afternoon sunshine. 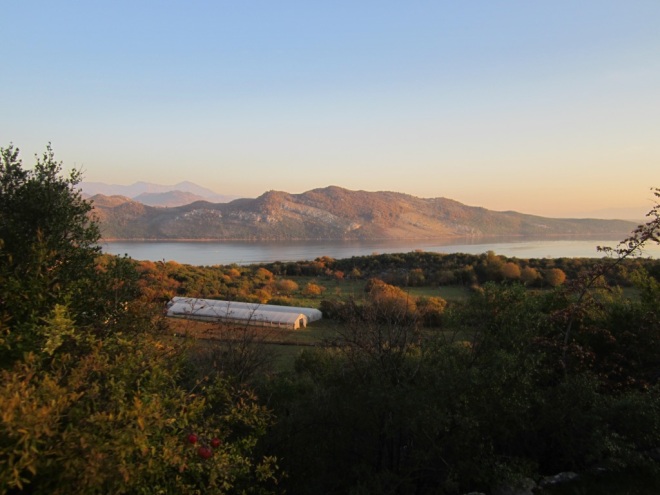 Lovely in the late afternoon!

At the border we said our goodbyes. Meeting Petar was certainly the best thing that happened to us in Montenegro. It made our brief 36 or so hours here so much richer, and showed us places we would otherwise not have seen. We may lead very different lives, and come from very different backgrounds, but this ride was a reminder of how human’s are kind and open, given half a chance. 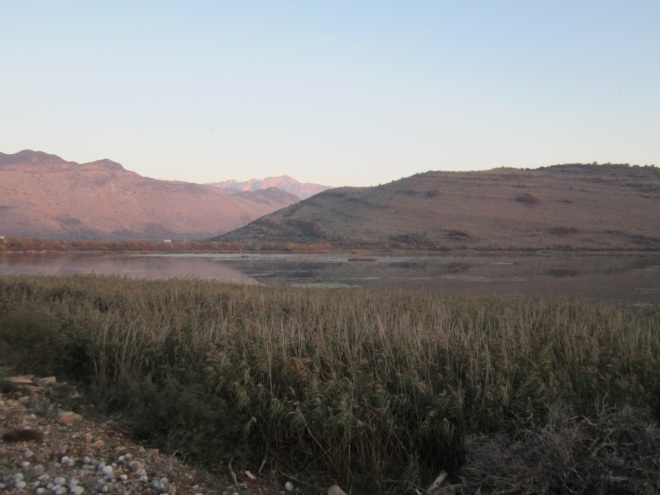