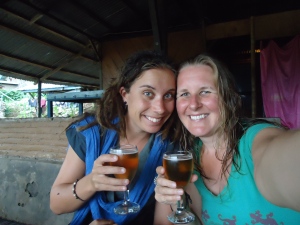 I never planned to cycle to Scotland. Cycle touring, a bit like our trip seems to have organically imbedded itself in my consciousness. It started with the thrilling purchase of a bike in my mid 20’s following many false starts when I thought I should be loving cycling but really hated it.

I eventually fell in love with the freedom of commuting, the feeling of really being alive and in the world as you whizz past those unfortunate individuals stuck in peak hour traffic. Not to mention the automatic prime parking. Commuting progressed to weekend rail trail rides with friends. Later, some of my friends started doing something called cycle touring, my interest was sparked. Then I had a few chance meetings with some inspiring individuals who had cycled vast parts of Europe and Australia and before I knew it I was climbing a pass in New Zealand on my first solo cycle tour.

Then I met Astrid. Beautiful, adventurous Astrid. Not long after our meeting we were sitting in a bar in Northcote when the topic of travel came up. We both admitted that we would love to travel from Australia to Europe, overland. I should have known then where this would lead.

“We can travel by train and bus,” we exclaimed. “And boat.”

Some weeks later the topic of bike touring reared its head. While Astrid commuted everywhere on her trusty bike Tulula (now sadly stolen) she had never bike toured.

“Maybe we could ride up the east coast of Australia?” I ventured. “And leave the bikes in Darwin and continue from there?”

So that became our working plan. But some ideas cannot be contained and just grow, quite of their own accord. So our’s grew, seemingly quite naturally into a bike tour from Melbourne to Scotland.

So now it’s just under 3 months until we cycle out of Melbourne and into the unknown. Well, into Warburton really. We have our first day planned but after that we have no idea other than Sydney by 28th of april and Darwin sometime in late July. This blog is a way to document our experience, both for ourselves and our family and friends. We hope many of them will join us throughout our journey.

3 thoughts on “An idea that grew…”