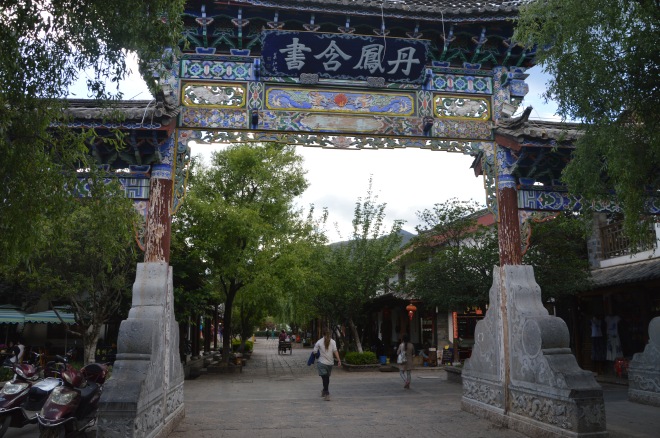 We explored the historical cities of Dali, Lijiang and Shuhe.

After cycling through the relaxed back waters of Yunnan, the tourist meccas of Dali, Lijiang and Shuhe were like stepping into a shopping mall on Boxing Day in Melbourne.  It was great to jump in with the crowds and explore the beauty of these (renovated) ancient cities, and then hide away with a cup of tea (or beer) in our guesthouse.  We were to learn that Chinese tourisms is definitely in a league of its own with large tour groups, astronomical price hikes and loads of bling.

Having a leisurely stroll through the streets of Dali.

Relaxing morning with tea, porridge and a book. 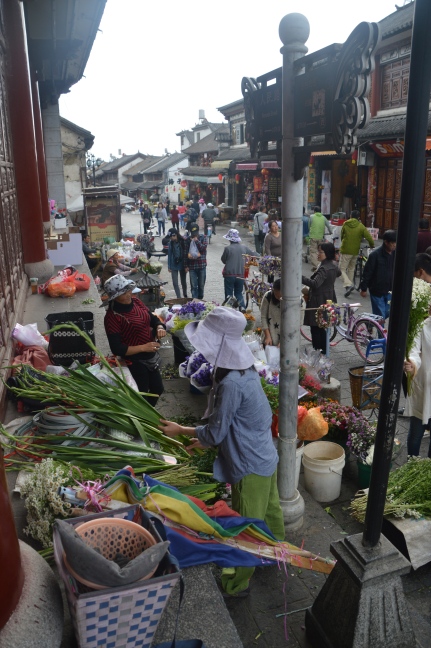 Full of life and colour 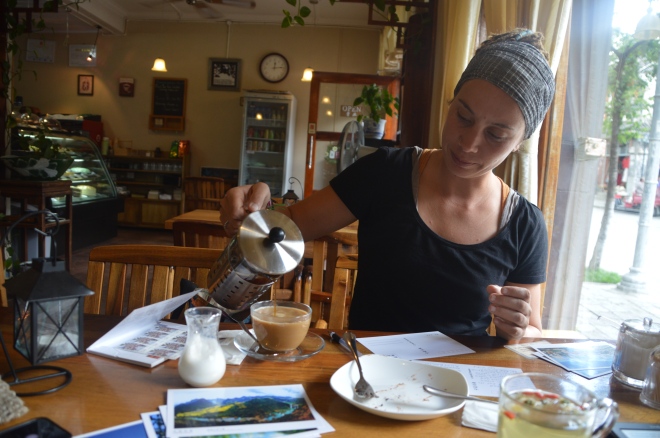 Good coffee is a must for Jude, especially on rest days. 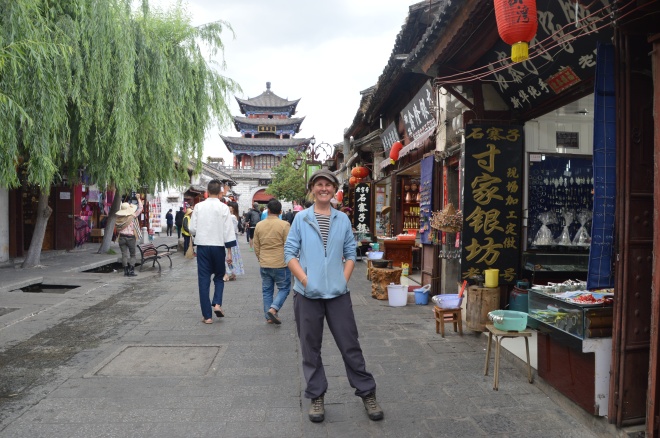 Luckily our rest day in Dali meant: no alarm waking us up, a relaxed morning with tea in one hand and book in the other, a leisurely stroll around town looking at the colourful old buildings, good coffee, tasty treats and a reprieve for my bum.  We enjoyed ourselves so much that we didn’t want to leave the next day and a smattering of rain provided a good excuse for a sleep in before hitting the road.  As we cycled out of town the clouds hung heavy over the mountains to our left, while the waters of Lake Erhai sparkled on our right.  Despite cycling along a major road, we enjoyed looking at the fields filled with farmers tilling the land and large groups of women gossiping and planting rice.  Passing through numerous Bai villages we admired the women in their traditional dress and enjoyed spicy hand made noodles and baked bread.  Near the northern tip of Erhai Lake we were passed by a group of cyclists who invited us to join them for lunch where we shared a veritable feast of food we would never have known how to order in our non-existent Chinese. 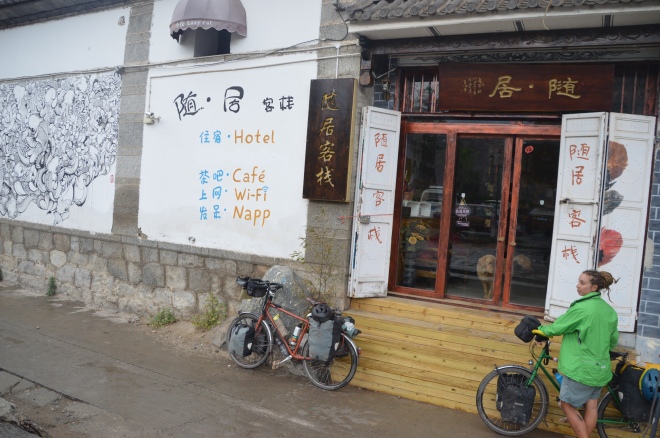 Our funky hotel in Dali. 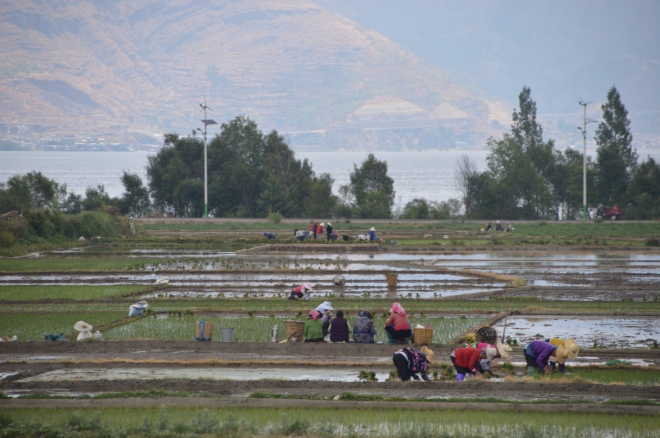 Bai women at the market.

I’m still getting used to the decisions and concessions we have to make now that we are cycling through China.  With limited time (due to visas) and large distances, our ability to be spontaneous has been dramatically curbed.  Our new cycling friends had inviteded us to join them for drinks at their next stop, but after cycling 15km in the opposite direction from the one we were meant to be travelling, we had to stop and have a serious heart to heart about how we were going to tackle cycling in China.  We decided that changes to our route can be made, but it needs to be in the direction we are going so that we can make it across China in time. 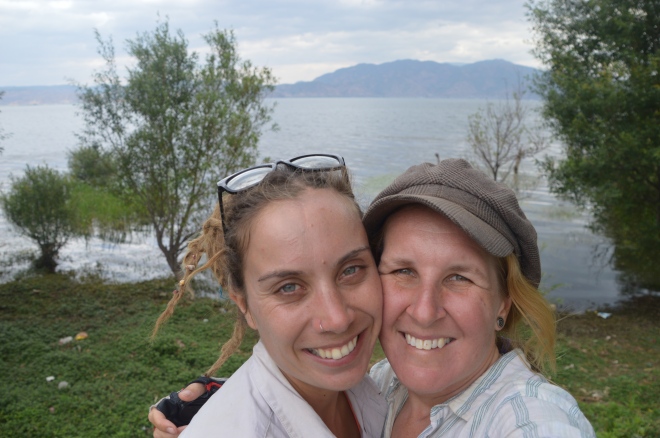 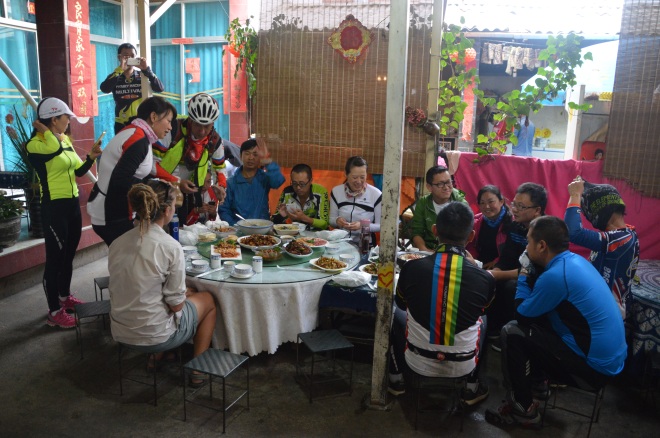 An amazing feast to be shared.

Threatening clouds followed us that day.

Feeling back at home – our first camp in China.

Back on track along the S221 we cycled for the remaining daylight hours, squeezing in a climb and just before dusk we made our first camp in China.  Hidden amongst pine trees we snuggled in our tent and enjoyed the beauty of being back in our mobile home.  A handful of towns were dispersed along the road to Lijiang where we were able to collect some water and fill our bellies with steamed buns and plates of rice and vegetables.  The valleys we cycled through were abundant with wheat heads swaying in the wind, the smell of roses mixing with smoke as fields were burnt after the cops were harvested.  Roadworks are a constant in China and after sharing 30kms of potholed dirt road with impatient drivers we were excited to find ourselves alone on a new road which became a expresswayway.  Despite big signs saying no bicycles, we thought ‘stuff it’ and cycled passed the toll gates to enjoy 40kms of smooth cycling in to town. 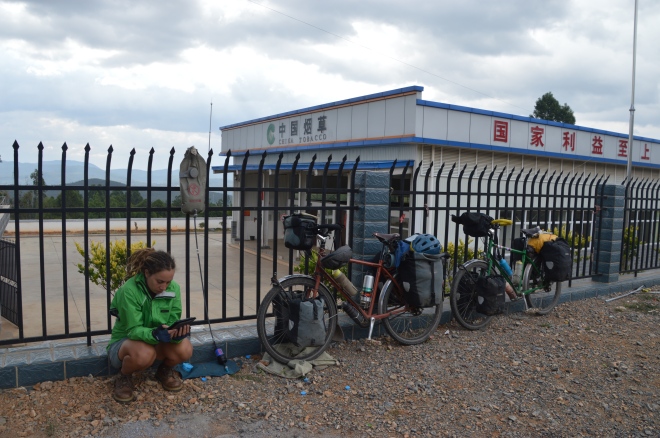 Jude reads the classics while waiting for our water to filter.

Typical Asia, women working while the men look on. 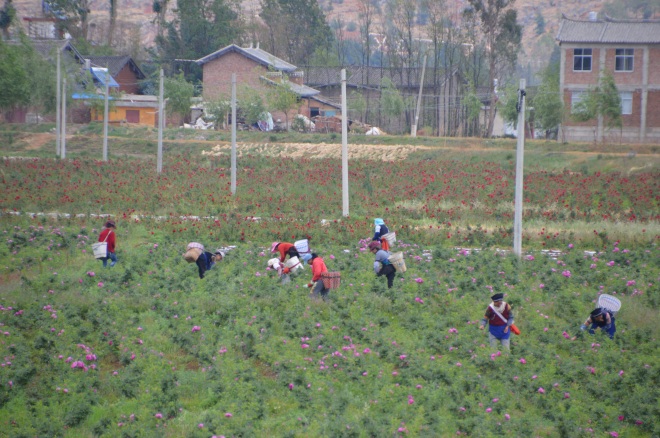 Jude enjoying the smooth surface of the motorway and the smell of roses.

Old Lijiang town is what my tourist nightmares are made of.  Flashy rebuilds, hundreds of shops selling the same three items, touts trying to pull you into restaurants, food and accommodation triple the normal price, and thousands of people packed into narrow streets and alleys while we try to push our laden bikes to find a place to lay our heads.  Once inside our little courtyard we could relax and breathe again.  Around dinner time we did venture out, but if I had found our earlier foray excessive, Lijiang at night is like a show pony on speed.  It was too much for a couple of road weary cyclists so we ate, we bought chocolate and we hibernated until morning when we could explore the town as it slowly woke up.  In the cool morning air we ate street snacks, laughed at the comically translated signage and became lost in the little alleyways that ran amongst the waterways that meander through the town. 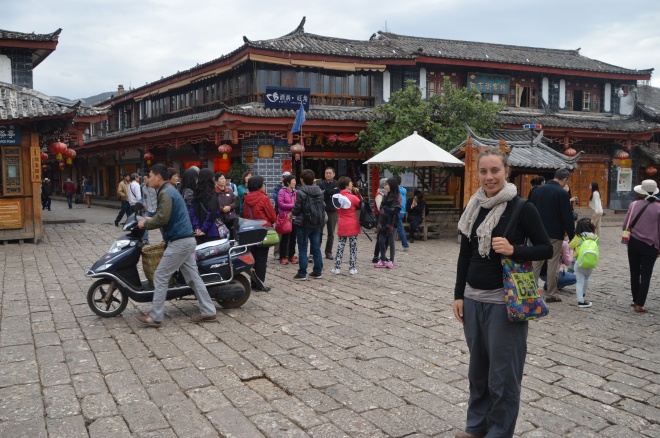 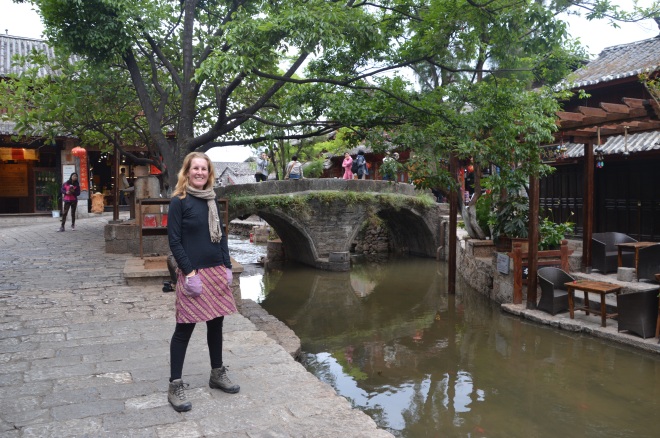 The streets run alongside the waterways.

Remember that people, shopping should be rational. 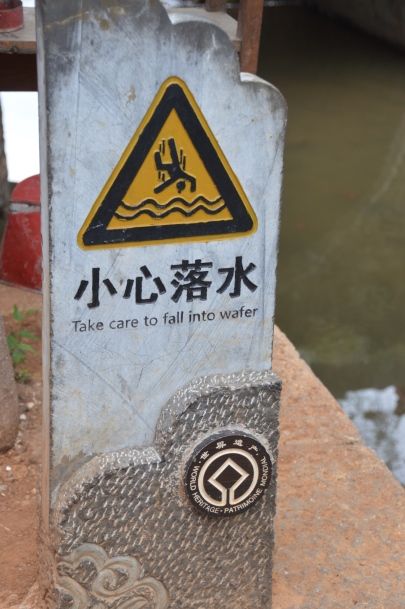 As Lijiang was swinging into its daily ritual, we waved it goodbye and cycled north towards the town of Shuhe.  We had read that it was less full on than Lijiang and that there was a cafe/hotel there run by a dutch cycle tourist.  Having no internet access due to the incompetence of Chinese mobile phone providers, we rocked into town not knowing exactly where it was but thought finding the place would not be hard.  Oh how wrong we were.  We spent hours trying to find a place that no longer exists, so much for our rest day.  The chaos continued when our bank card no longer worked and I spent the next couple of hours cycling around trying to find a place that would accept our card so that we could buy dinner and pay for our adventure to Tiger Leaping Gorge the following day.  Turns out we were the victims of credit card fraud and luckily our bank had picked it early.  Luckily we had a back-up and as the full moon rose we treated ourselves to homemade pizza and banana cake.  Tomorrow would be a better day. 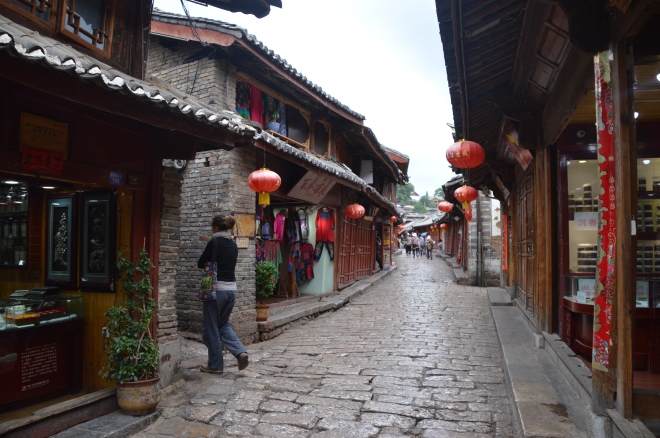 Quiet streets in the morning. 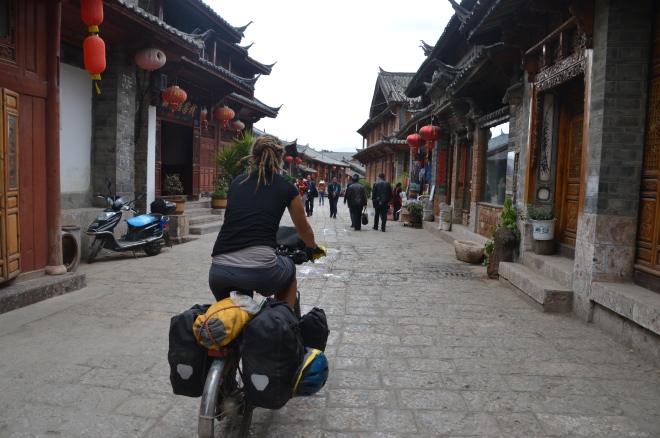 Cycling out of Lijiang. 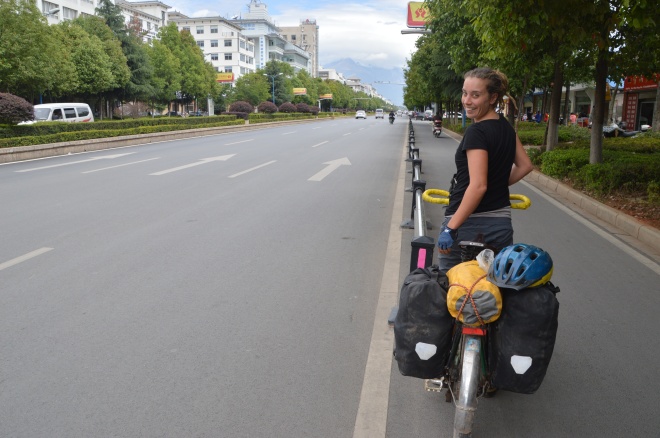 Towards Shuhe and some snow capped peaks. 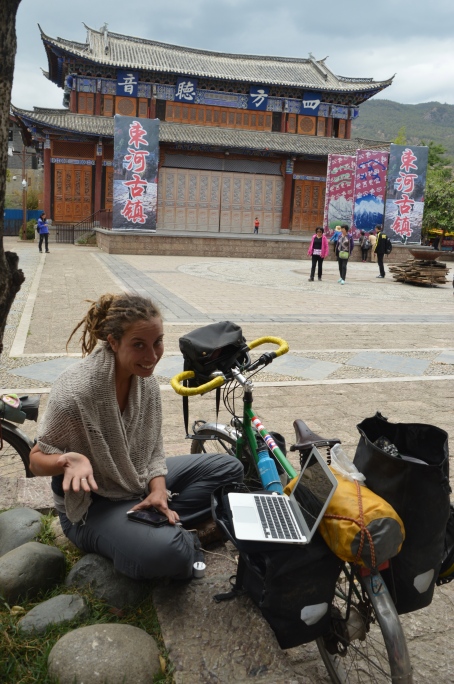 Where is the place we are looking for????

Our excitement was palpable when we woke.  The ladies would have a rest while we headed off for some spectacular hiking in Tiger Leaping Gorge.  The bus dropped us off at the trail head and we began our climb along the track that we would be following for the next two days.  Words cannot do justice to how stunning the gorge is.  Every hundred metres we would stop and ogle at the surrounding mountains, the snow capped peaks, the Yangtze River pounding far below.  It was intoxicating.  Banter was exchanged with other hikers on the track and we spurred each other on through the numerous switchbacks and on rest breaks we revelled in the beauty of the surrounds.  Our room for the night had 270 degree views of the gorge and after a few celebratory beers and some dinner we lay in bed and watched the surrounding peaks disappear into darkness. 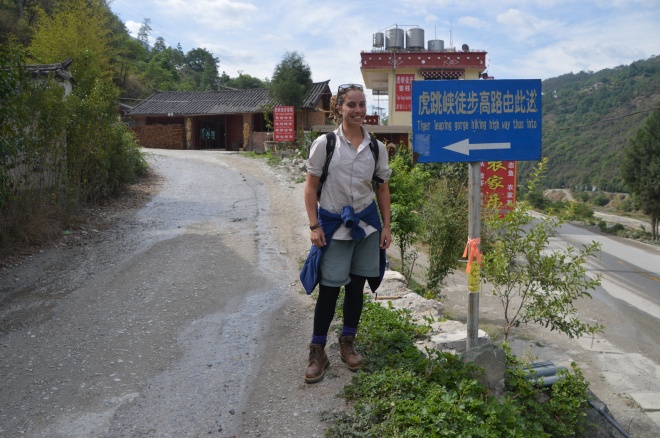 We stopped and ogled every hundred metres.

Looking down the gorge towards Shangri La.

As first light coloured the sky we snuggled into our thick blankets and were grateful for our wonderful life.  The clouds changed from pink to red and the 2000m cliff face opposite us loomed large in the morning light.  We hit the path early catching the first rays of the sun as they peaked over the mountain tops.  Passing shepherds with their goats and a handful of waterfalls, we soaked up the last few hours of high road hiking before heading down the 1600m pass to the Yangtze River.  It churned and roared through the narrow gorge where legend has it a tiger leap to its safety over the river.  The power of the area affected all our senses and we lost ourselves for a while.  On the return hike we took a short cut up a ladder and I clung on for dear life refusing to look down until I reached the top.  By late afternoon it was time to pile back on the bus to Shuhe and our hiking adventure was complete.  As the sun set we walked through town with smiles on our faces and a glow in our hearts.  Tomorrow we would be back on the bikes cycling towards Lugu Lake, but tonight we would sleep and dream of snow capped mountains and tigers leaping. 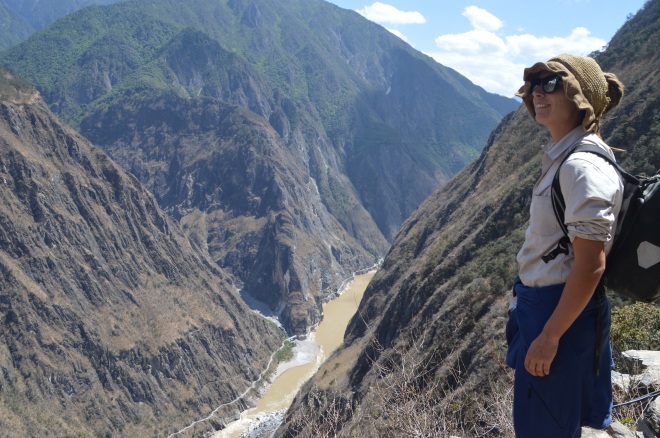 Jude looks over the mountains and the Yangtze.

We would have just kept hiking.

Jude is an animal whisperer.

Inspired by thoughts of beer and dinner.

Looking out of our bedroom window.

Celebratory beer with a view. 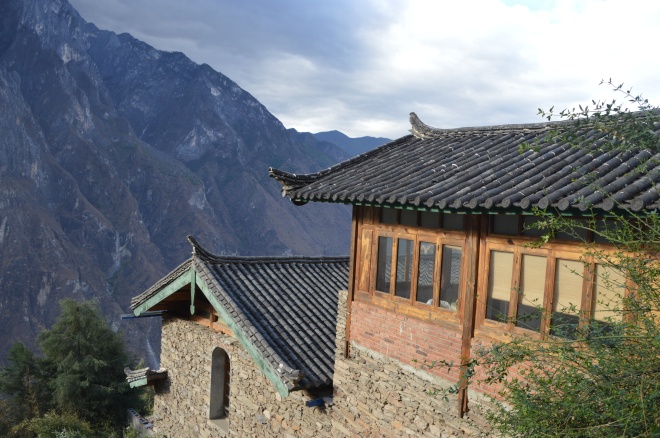 Our room overlooking the valley. 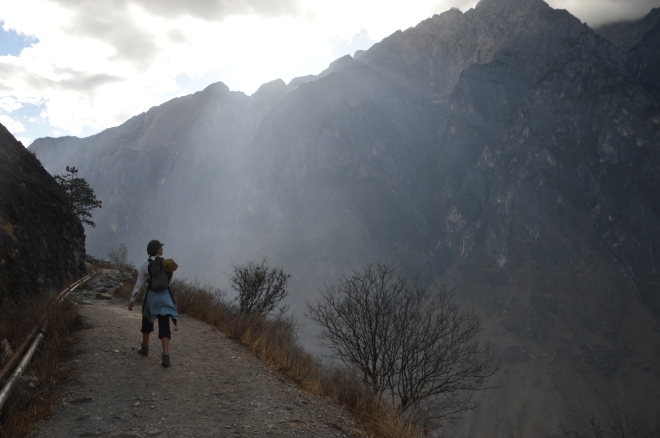 The sun’s first rays come over the mountains.

(Just a little disclaimer, we are sorry for the long delay between blogs.  Poor wifi, 12 hour riding days and amazing things to see and explore have put us behind by over a month.  After some blog tutorage from some friendly travellers we may be more on top of things this month.) 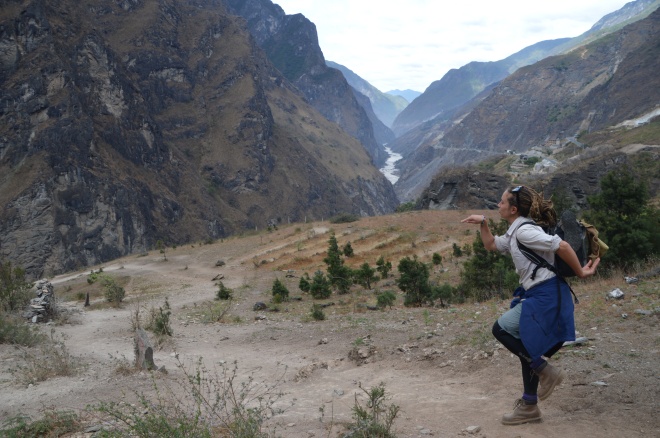 Down by the raging waters of the Yangtze. 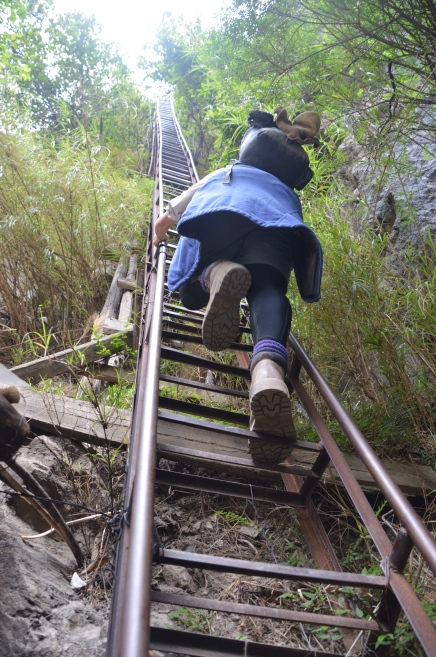 Feeling small next to such power. 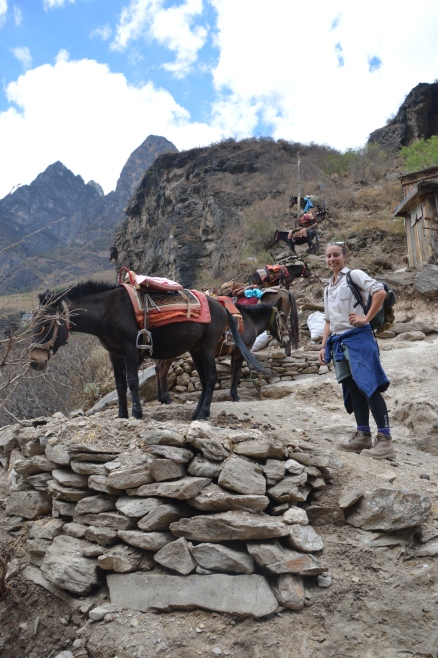 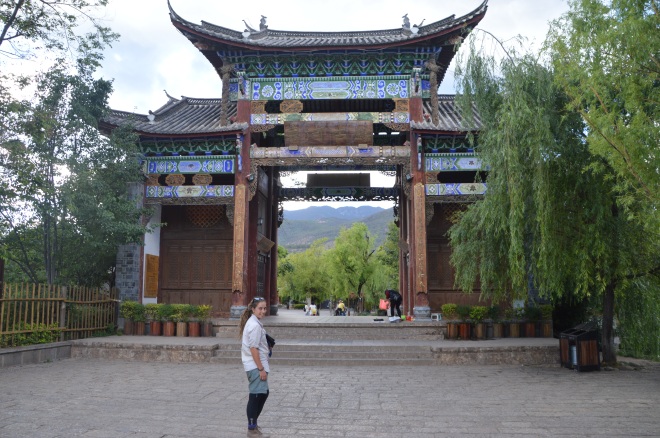 Back in Shuhe – tired but happy.

A stroll through Shuhe as the sun sets on another wonderful day.

8 thoughts on “Time to be a tourist in China.”