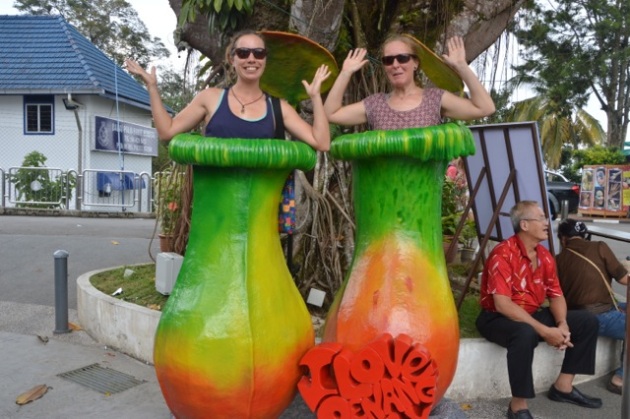 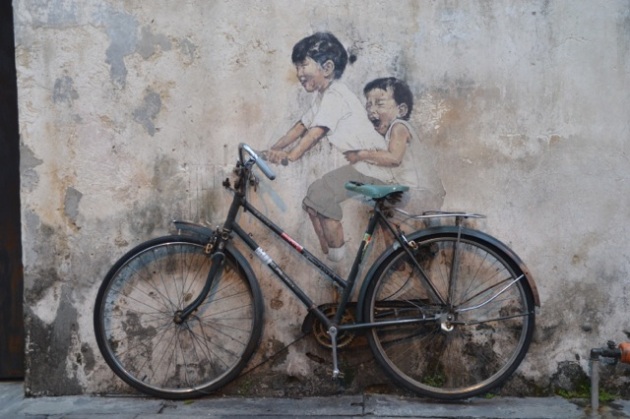 We rolled into Georgetown, Penang in the early evening, exhausted after 133km (our biggest day by 3km). I always feel especially happy after these epic days, particularly when I know we have time off in front of us to relax. It feels like we have earned it. Our wonderful British ‘pod’ friends had messaged us earlier, letting us know where they were staying, so we didn’t even need to search around for accommodation. A few weeks of the same arrangement had them joking that we should be paying them a commission to be our travel agents. They had certainly done an amazing job in Penang, as our accommodation was in a beautiful restored Chinese shop house. It was quite a small hostel, so it almost felt like a very large (clean) share house, as our group took up most of the rooms. Even though it had only been two days on the road, it was lovely seeing familiar faces. Like I have said before, it’s a well worn backpacker trail in Malaysia and we would continue to have a much more social experience here than in Indonesia. After having a delightfully cold shower and a beer, a large group consisting of the pod, Chui, Pim and us went out for dinner in a Hawker Centre nearby, before falling into bed, exhausted. 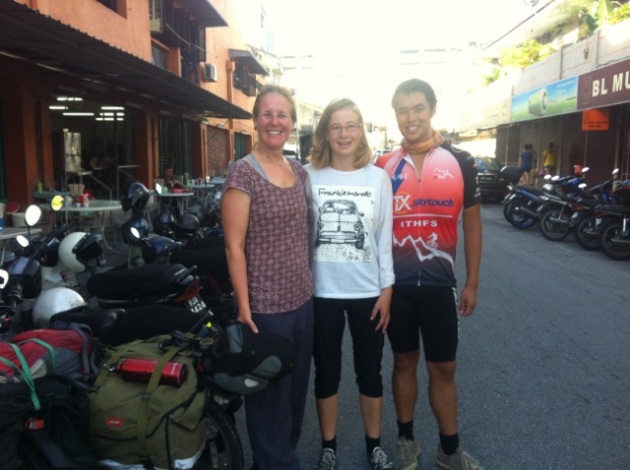 Backpackers turned cyclists, Chui and Pim. May we meet again in the Netherlands! 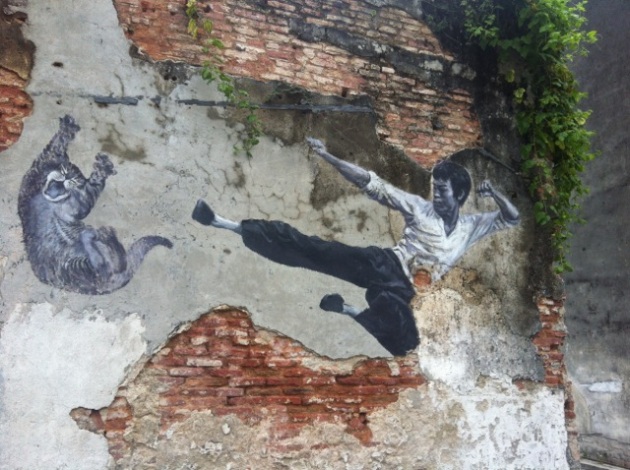 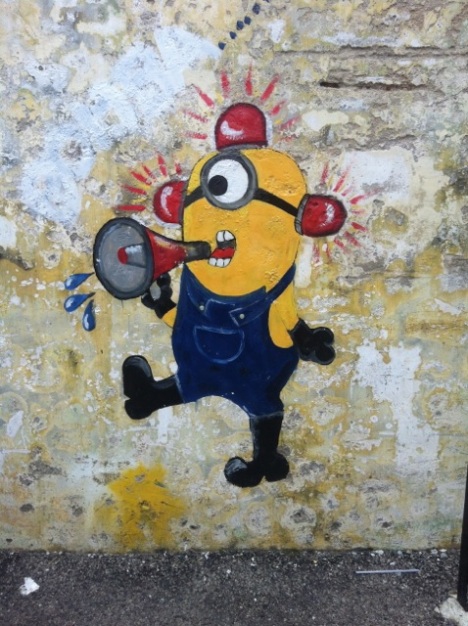 The next day we got to appreciate that Georgetown where we were staying was really a special place. Again, it was the intoxicating mix of Malay, Chinese, Indian and European culture. Every street corner will offer you an array of food choices, sounds and smells. There are hidden wine bars run by Belgium expats, streets blasting Bollywood tunes and carts selling Chinese herbal tea. I think these are the things I really appreciate: cultures mixing and living side by side. Again I am reflecting back at the world the things that I know from home, but what are we but at least partially a product of our surroundings? Of course like anywhere there are hidden racial tensions that you can only appreciate with time. Many people would say Australia is multicultural, but we all know that racism certainly exists there, as it does here. Still, there are people here, as there are in Australia that genuinely want to see a multicultural society, where ideas, experiences and culture is shared and valued. This was certainly evident at the literary festival we attended, where people from all walks of Malaysian society shared their work and ideas. 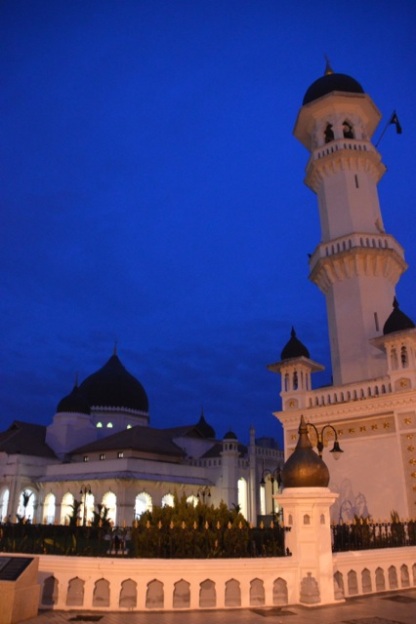 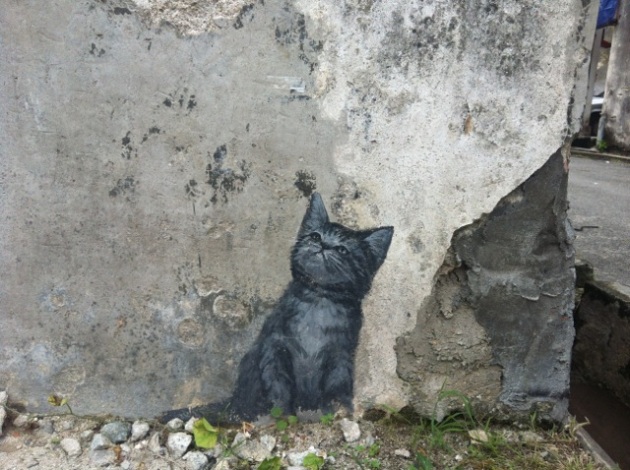 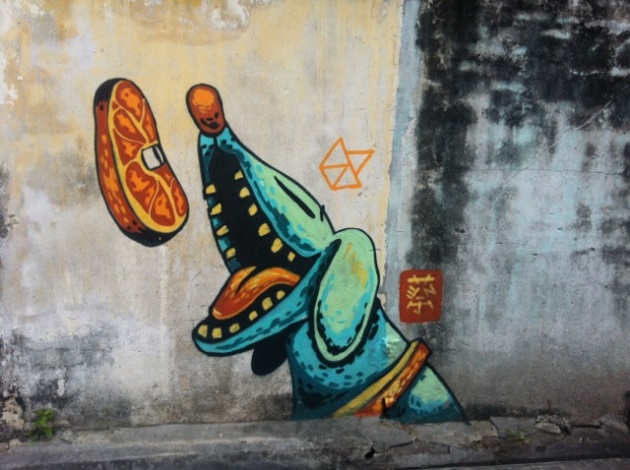 Unfortunately Astrid became a little unwell on our first few days in Penang, so we mixed up chilling out in our room, watching Spooks in our underwear, with culture. The literary festival, coffee houses, bars and street art were a real highlight of wonderful Georgetown. We even made it to a very disturbing Indonesian film called ‘the act of killing’.  It was about Government sponsored psychopaths murdering communists (or suspected communists) during Suharto’s reign. Many of these people are still in power today. Remarkably, this film is not banned in Indonesia but is not widely distributed. It certainly paints a very disturbing picture of Indonesian society, even today. 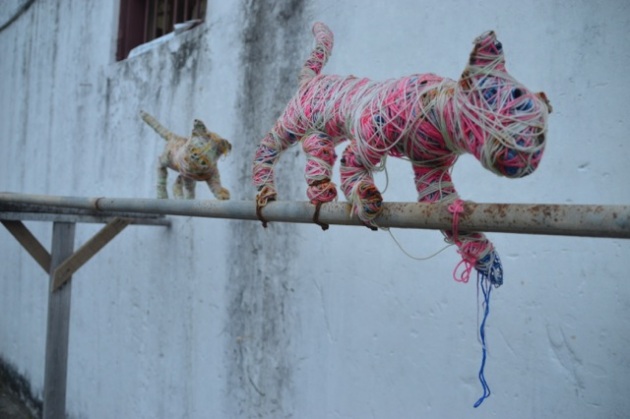 So cool! more random art in Georgetown. You find these kind of things all through the back streets 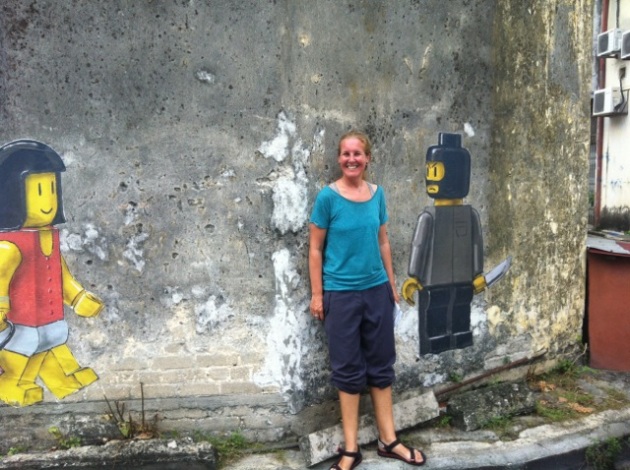 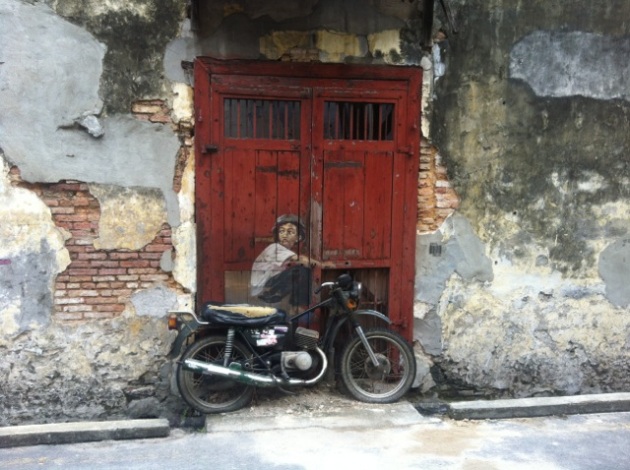 Our time in Penang was also an opportunity to pick up our 60 day Thai Visa as otherwise you are only granted a 15 day visa on land crossings. After the beaurocratic nightmare that was Indonesia we slightly anxious about exactly what this would entail. We were more than pleasantly surprised when whole process only involved a form, 2 passport photos, 110 RM (each) and a pick up that afternoon. We could barely believe it. I almost didn’t make it to pick up the visa though. As Astrid was still a bit sick, I insisted she stay at the hostel and I go and pick up our visas on my own. No issue, I had been there that very morning. So wrong. Combine someone who is slightly challenged at directions, with many one way streets, torrential rain and a i phone that keeps cracking the shits when it gets damp and you have me cycling completed saturated and on the verge of tears of rage. I am sure I went around in endless circles and in the end I found the embassy quite by chance, 15 minutes after it had supposedly shut. Embassies are usually fickle with their closing times but this one was luckily still open. I was very grateful. 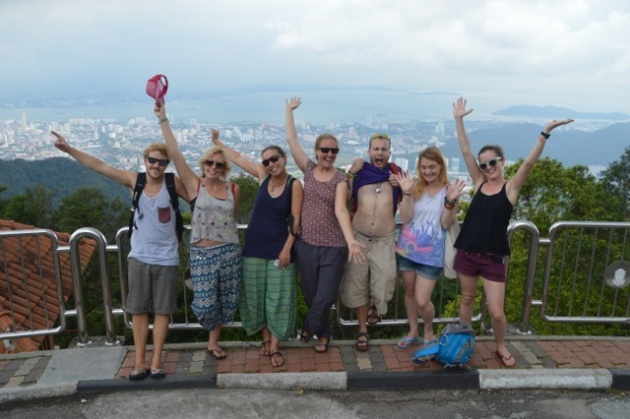 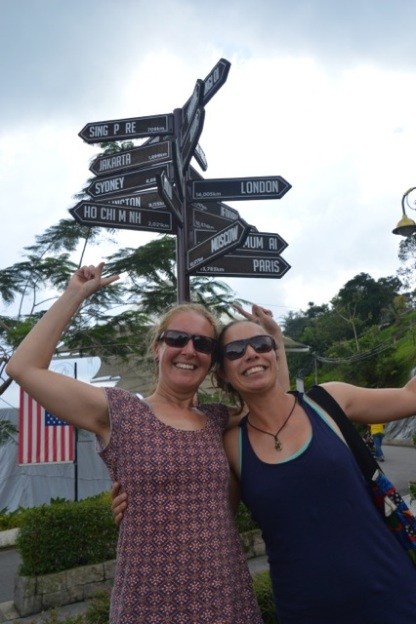 It’s still a long way to go! A sign with the kilometres for London on it.

Apparently “you haven’t been to Penang if you haven’t been to Penang Hill”. Taking our inspiration from our British friends, we decided to join them on a trek to see what exactly Penang Hill involved. We took a bus, then a crazy, almost vertical train to the summit of a hill that overlooked Penang. On the summit was a menagerie of tourist attractions, including a ‘Dinosaur museum’ in a tent like structure. The ‘Dinosaur’s ‘ sounded like cow’s in distress. There was also an Owl Museum, which we wanted to go to, just because it sounded like a good story. Sadly it was out of our price range. In the end we explored a Hindu Temple, I accidently knocked over a small child that ran behind me as I was demonstrating my acrobatic talents and laughed a lot, before heading back, not entirely sure why you “haven’t been to Penang until you have been to Penang Hill”. 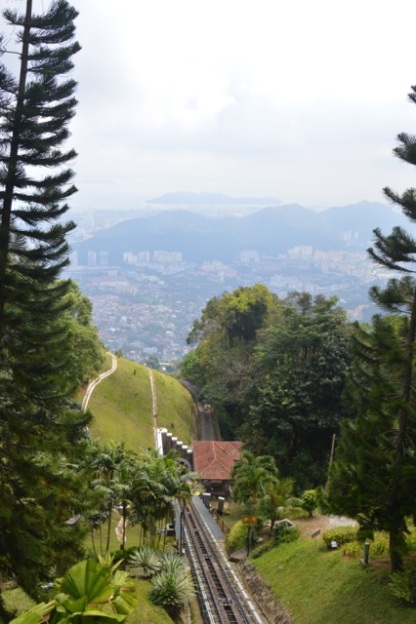 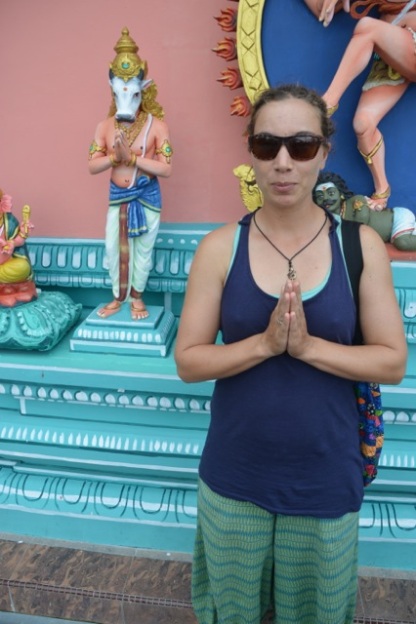 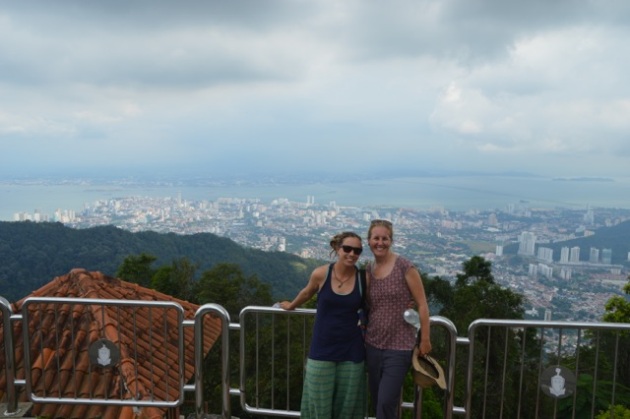 The time arrived to bid ‘the pod’ farewell, with plans to meet again in a few days in Langkawi. We also bid farewell to Georgetown and began the 25km cycle to the national park. On our way out of town we had an unfortunate experience with a driver who decided to overtake Astrid from behind and then turn left in front of her. Idiotically, when Astrid hit her car and was thrown from ‘the dirty samon’, the woman insisted on blaming Astrid because she had ‘had her indicator on’. Man, I hate car drivers at times. Astrid (who was luckily only bruised and scratched) would stand none of it and told the lady she was going to the police. We both quickly cycled the 300m to the police station, not before our idiotic driver made it there, pleading her case. The police asked us what happened and it was kind of funny as our story was exactly the same as hers, except that she didn’t realise she was completely in the wrong. When it became clear to her that the police were on our side, she rapidly changed her tune, apologising and pleading with us not to take it further. Neither of us could actually be bothered taking it further, we wouldn’t even have gone to the police if she had not been such an arrogant twat about it, refusing to take responsibility about something that was clearly her fault. After Astrid gave her a lecture and she apologised, we left and continued our cycle towards the national park. 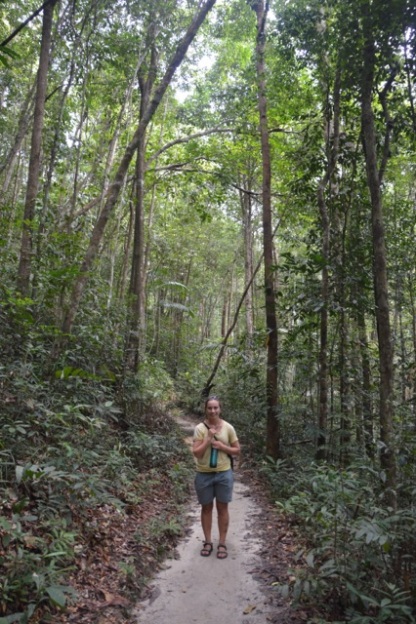 Hiking through the beautiful National Park 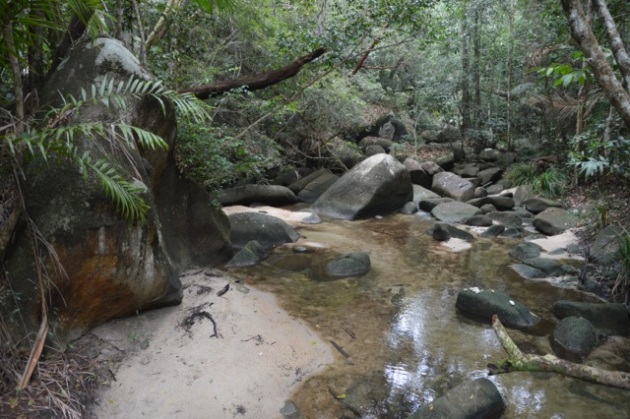 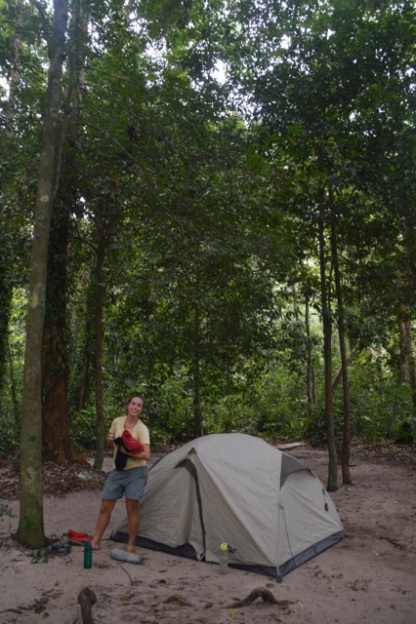 At the park we chained our bikes to the fence and converted our panniers to backpacks. One of the best things we purchased before we left was an Ortlieb pannier carrier system, which basically clicks into the pannier, turning it into a backpack. Unfortunately we only have one, so the other pannier was carried rather awkwardly, like an oversized shoulder bag. We then trekked for about 2 hours through the jungle to a beautiful beach that reminded us a little of ‘the prom’. The campground was set back from the beach a little in the jungle, with toilets, showers and kitchen area. Better still, national parks in Malaysia are not full of rubbish and are completely free. We spent the afternoon swimming and relaxing on the beach. In the evening a creature came out of the water and I briefly had a freak out that it was a Komodo Dragon (which is impossible) but it ended up being a type of Otter. Very cute, actually. That night we fell asleep to the yet unfamiliar but soothing noises of the jungle. 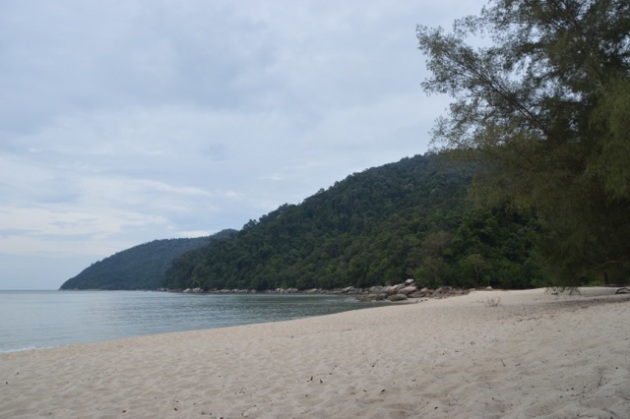 This reminds us a bit of the prom 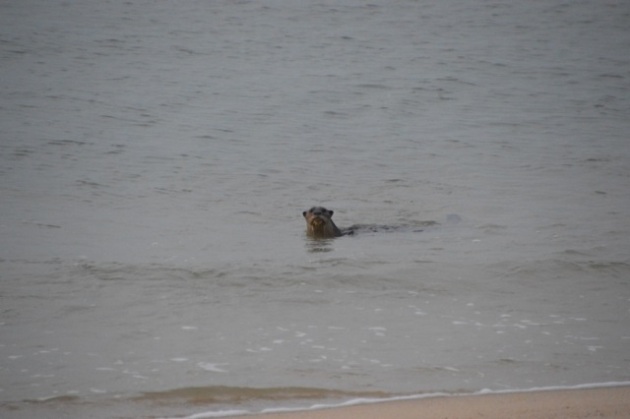 Some kind of tropical Otter – not a Komodo Dragon! 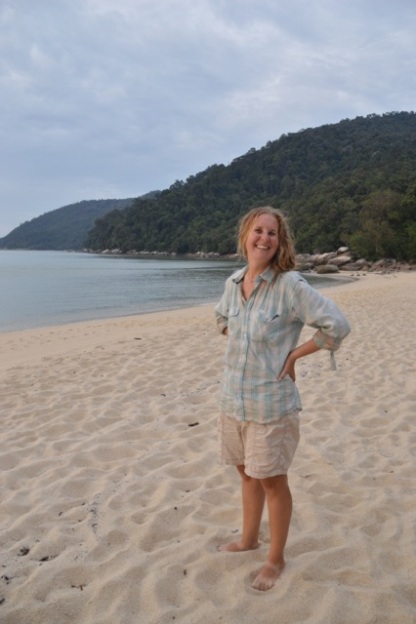 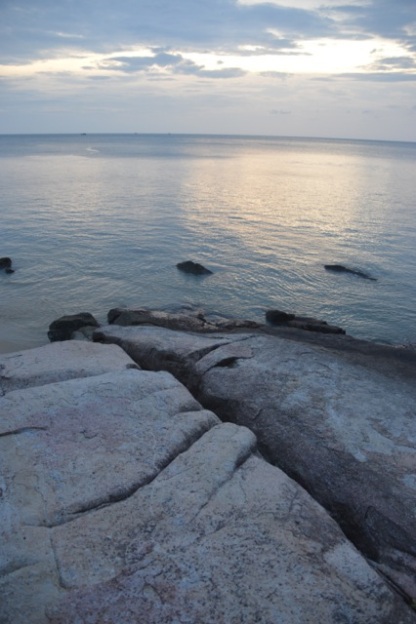 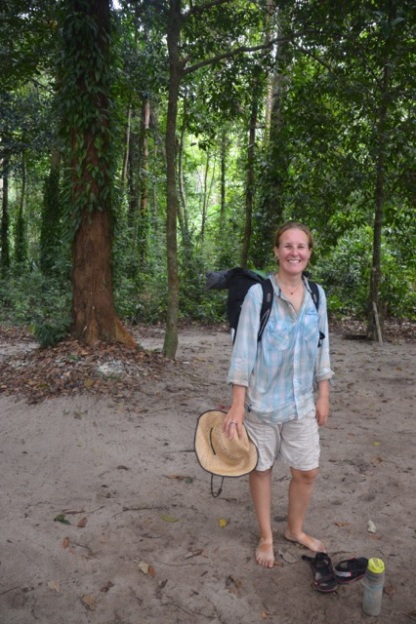 Ready to hike out

After one of the best sleeps I have had in the tent we went for a morning trail run to another beach, had a swim and then trekked back out to bikes. It was a real highlight staying in the national park and I would highly recommend it to anyone who has the good fortune of visiting Penang. The cycle back took us along the coast, past a floating mosque and beach side towns. Back in Georgetown we repacked our panniers and got our bikes ready for the big cycle to Langkawi the next day.  Both of us have enjoyed Penang a lot. It was an opportunity to do a lot of the things we like to do at home, enjoy culture, go to the movies, eat amazing food and hang out with friends. 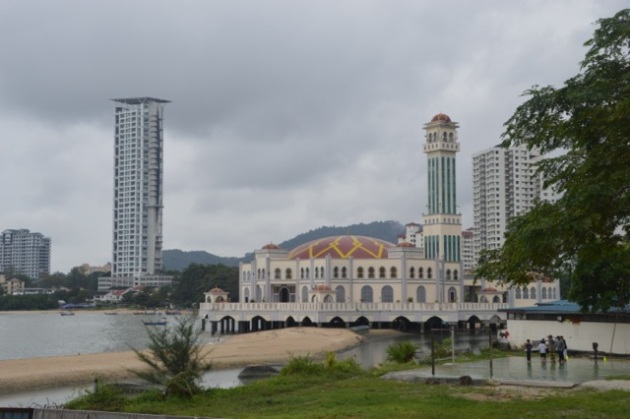 At high tide, the Mosque apparently looks like it is floating 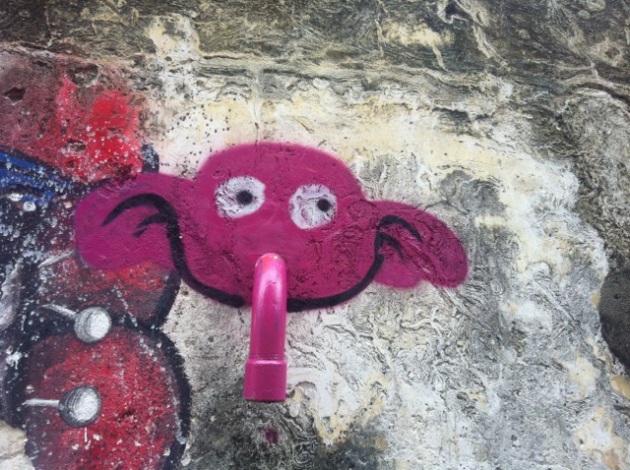 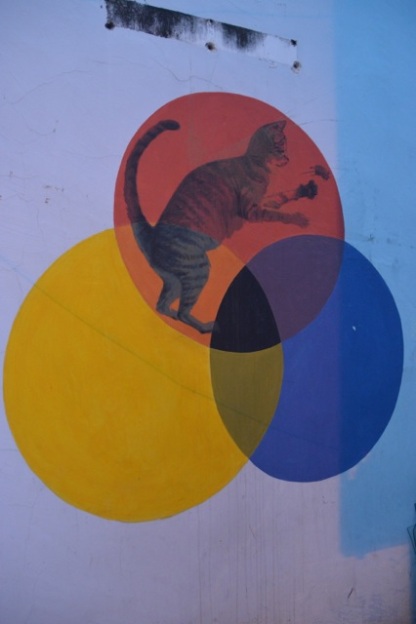