Sydney to Newcastle via the Hunter Valley

Looking over the Hunter Valley

Dream on it. Let your mind take you to places you would like to go, and then think about it and plan it and celebrate the possibilities.

It has been four weeks since we began this journey.  We are living our dream now, and it is  the most amazing experience of my life.  Recently I have realised that it’s the distractions that make a journey great.  Whether it be a place, side road, people or experience.  The road to Sydney had seemed familiar, our destination set. The road beyond, unknown.  We could take the most direct route, but what fun would that be?  As always – local knowledge is a great asset.  Our new route to Newcastle took us though ridge and valley country.  Yes, this meant more undulations, hills, ups and downs. Amazingly, we are now used to this.

We began with a beautiful afternoons ride with Glen (our local), through Bobin Head and a night’s camping on a ridge top overlooking the national park in the north of Sydney.  The next morning we had an unfortunate start, by riding through Galston Gorge during peak hour.  All Sydney-siders are by now staring at the computer screen in horror – you rode through Galston Gorge!!! during peak hour!!!! Yep, and it sucked.  Very narrow road, no shoulder, stone wall one side/steep drop the other, and obnoxious drivers.  Very unsatisfactory to the daughter of a civil engineer, no more needs to be said.  Luckily, the road from there on was fun.  The sun was shining, and we rode through fertile land full of flowers and vegetable gardens.  We stocked up on local produce from street side stalls and a little shop/shed that used an honesty system.  From here, we bought the best fig and ginger jam ever – and yes, we have almost finished the whole jar in 4 days!  Riding makes you develop a ferocious appetite, and Jude does believe that we will soon have consumed our weight in bread. 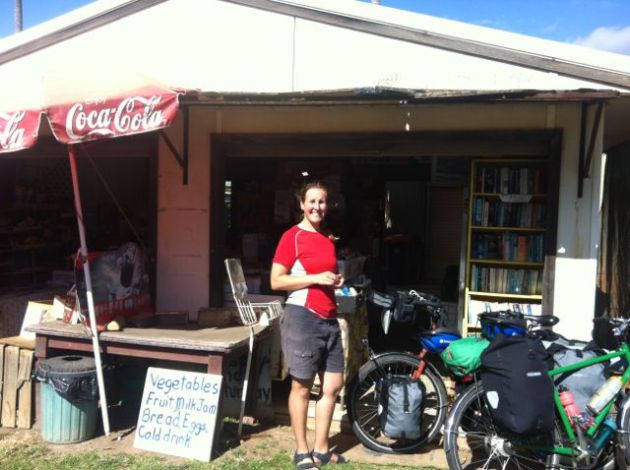 From the ridges, we descended via the River Road into the valley and along the edge of the Hawkesbury River.  With the river flowing along our left and the occasional cliff face to our right, we meandered our way through many sleepy towns to Wiseman’s Ferry.  The quick ferry ride took us to the other side, and after a large day of riding we sought the refuge of a forest to rest.  Unfortunately, the millions of mosquitos did not agree, and we were mauled before we were able to put up our home, and escape to an afternoon of reading and chocolate biscuits.

Overhangs on the River Road 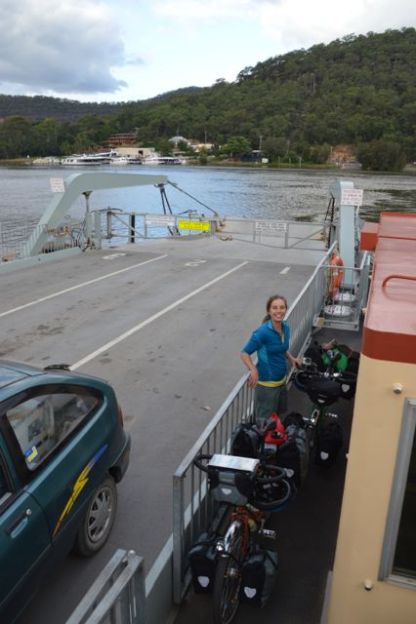 On the Wiseman’s Ferry

We awoke to a cacophony of bird songs and a misty morning in the valley.  After a cup of tea, we took a chance and found (with a little help from some locals) that we could cycle out of the little lane we had camped on, up the hill and on to the main road.  We continued to cycle through the valley, passed the St. Jude’s church for sale and crossed into the gorgeous town of St Albans.

Scones at the pub St Albans

That evening, a major mountain bike race was to kick off in town and the organisers offered for us to stay and participate if we wanted to.  We seriously considered it, yet decided to move on.  But not before a coffee/tea and a serve of scones from the local pub.  The tavern is the most adorable pub I have ever been to – even at 9am.  And the scones were a secret gift from the motorcyclist we were chatting to.  If you ever meet a cycle tourist on your travels, a cheeky treat bought for them on the sly will be a kindness appreciated and remembered forever.

The MacDonald River near St Albans

From St Albans we passed through the St Albans common, an open farmland based on the english commons.  The valley was stunning and the riding was divine. Eventually this lead to the gravel climb up to Bucketty.  Many of the mountain bike ride competitors stopped us and admired that we were cycling this road with our heavily laden bikes, and we still receive comments from locals who state that their cars can hardly make it up that road.  It does feel good. 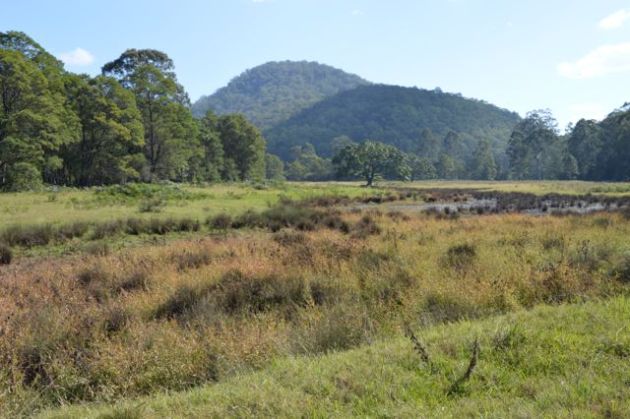 From here we headed down into the next valley following the old convict route looking at the remnants of the original road, culverts and buildings.  A champagne at the Laguna wine bar was refreshing.  We would have stayed for the band, but we have become nannas and the thought of going to bed after 8pm was too much to cope with.  So we rode the extra few km’s to Wollombi where we put up our tent up in the tavern’s backyard (for free) and could go to bed when we wanted.  Later in the evening we did partake in the local delicacy of Dr Jerds Jungle Juice and had fifty different local opinions imparted to us about which road we should take the next day. 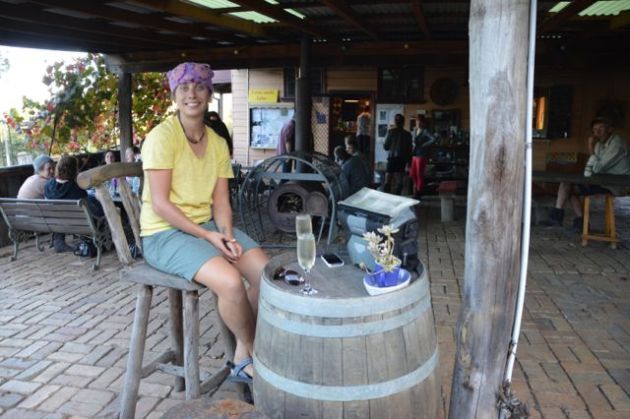 The road to the Broke area won, and after 30kms a wine tasting at Krinklewood bio-dynamic winery was brilliant. I had the best Rose ever and then we were given free-range on the property’s veggie garden.  With an armful of organic produce, we cycled through the rest of the Hunter Valley and tasted the wares of another winery, distillery, chocolate shop and cheese shop.  That night, we ‘sneaky’ camped in the local national park and feasted on the gourmet produce we acquired that day.

Riding in the Krinklewood winery 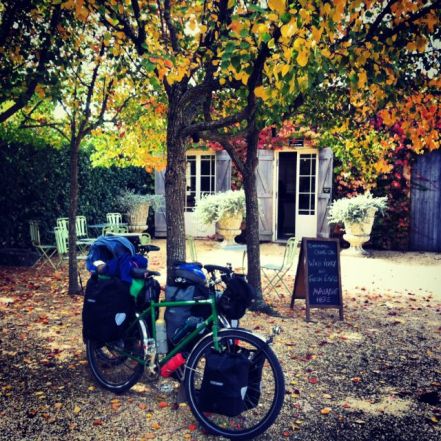 It was exciting to wake up on the morning of our four week leaving anniversary.  To answer our number one bike touring question – yes, my bum still does hurt after four weeks. Not every day, but I’d say every three days.  I recently purchased some lycra which has helped, but a daily inspection by Jude and paw paw cream works wonders.  Jude, on the other hand, rarely has any issues and believes that the ‘skins’ she rides in have a great effect. 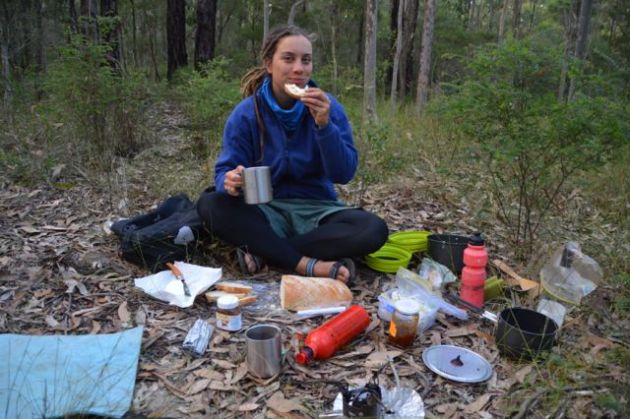 We stuck to the back roads into Newcastle and covered the 50km’s to Riki’s house by lunchtime.  It was great to stay with a friend again, and their house is just lovely.  We had our shower for the week and washed our clothes.  Then we had a driving tour of the history and suburbs of Newcastle.  This town is awesome by car or by bike, and last night we sampled wonderful micro-brewery beers at the Albion hotel – Riki’s favourite watering hotel.  Here we met Evan and Susan, and were invited into their lives.  To our delight we shared a wonderful evening sharing stories, food, wine, Australian music and their scenic view of Newcastle harbour.  It seems I end this blog with the story of a great night having dinner with amazing people, but that is the truth about cycle touring life.

Hope that your life is as joyous and wonderful, with all my love, Astrid xx

With Riki in her home town